If your ancestors moved to the frontier after the Revolutionary War, they likely participated in some aspect of Federal Land Grants later commonly referred to as the Homestead Acts. The first of these laws is described by the National Archives as follows:


The Land Ordinance of 1785 finally implemented a standardized system of Federal land surveys that eased boundary conflicts. Using astronomical starting points, territory was divided into a 6-mile square called a township prior to settlement. The township was divided into 36 sections, each measuring 1 square mile or 640 acres each. Sale of public land was viewed as a means to generate revenue for the Government rather than as a way to encourage settlement. Initially, an individual was required to purchase a full section of land at the cost of $1 per acre for 640 acres.

The original Homestead Act was passed in 1862. Here is a further description from the National Archives:


The new law established a three-fold homestead acquisition process: filing an application, improving the land, and filing for deed of title. Any U.S. citizen, or intended citizen, who had never borne arms against the U.S. Government could file an application and lay claim to 160 acres of surveyed Government land. For the next 5 years, the homesteader had to live on the land and improve it by building a 12-by-14 dwelling and growing crops. After 5 years, the homesteader could file for his patent (or deed of title) by submitting proof of residency and the required improvements to a local land office.

By 1934, over 1.6 million homestead applications were processed and more than 270 million acres—10 percent of all U.S. lands—passed into the hands of individuals. The passage of the Federal Land Policy and Management Act of 1976 repealed the Homestead Act in the 48 contiguous states, but it did grant a ten-year extension on claims in Alaska. See National Archives. We even have a National Monument dedicated to the the law. See Homestead National Monument of America.

Of course your genealogical research always includes searching land and property records. (Doesn't it?) Well, it should. Ownership of the land was always an important factor, even if your ancestors rented or were landless. Sometimes a surprising amount of genealogically important information can be discovered from deeds and other land records. The National Monument website explains where the homestead documents are located:

Over the course of the Act's 123-year history, over two million individual homestead claims were made. Each and every one of these claims generated a written record known as a case file that was kept by the U.S. General Land Office. Today, these case files exist only as paper originals and are stored in the National Archives in Washington, D.C. The complete collection of case files created under the Homestead Act contains over 30 million individual pieces of paper. These invaluable documents are subject to natural deterioration, fire and water damage.

I could make an editorial comment here about the negligence of the U.S. Government in failing to digitize valuable documents and make them available, but I won't.  Anyway, part of the records are available online. Those are the land patents or deeds given to the successful homesteader by the Federal Government through the General Land Office (GLO). You can find them at the Bureau of Land Management, General Land Office website. Here is a copy of my Great-grandfathers Land Patent for an example: 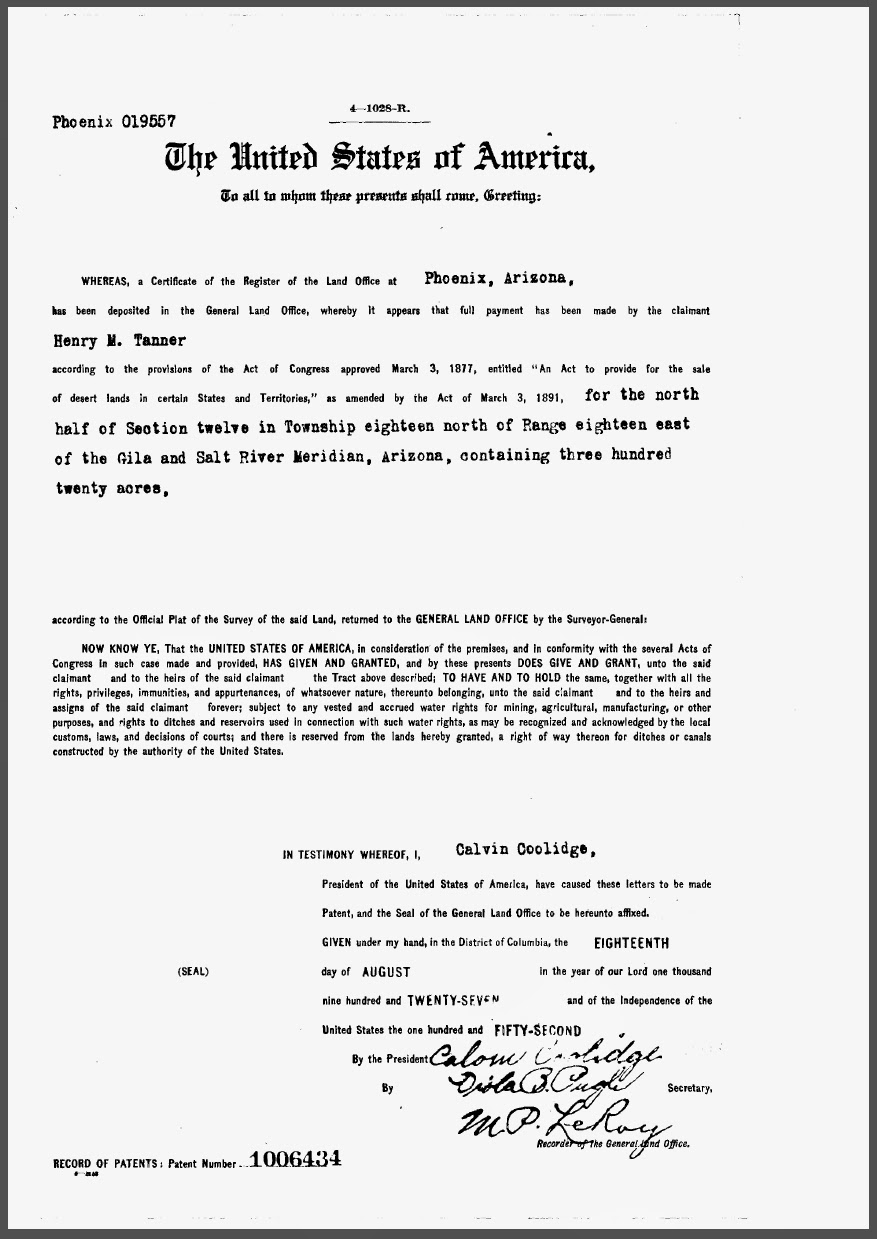 You might note that it is signed by President Calvin Coolidge. Now, I mentioned the lack of digitized copies. But there is a Land Records Project described as follows:


Homestead National Monument of America, fold3.com, FamilySearch, & the University of Nebraska-Lincoln have partnered in an effort to digitize all Homestead Land Entry Case Files housed at the National Archives. The Homestead Records Project seeks to digitize the over 800,000 Homestead Records from nearly 200 land offices in all 30 Homesteading States. Click here to see the project's current status and available land offices.

Fold3.com is a subscription website owned by Ancestry.com. Access to Fold3.com is available free through the FamilySearch Centers around the world.
Posted by James Tanner at 7:04 AM