Reflections on the Popularity of Family History (or Genealogy)

It would be appropriate for me to say "I told you so" but rather rude also. I was unable to attend the actual presentation at #RootsTech 2014, but I did send my wife to take notes and then FamilySearch conveniently published a post by Glen N. Greener entitled, "Empirical Evidence of the Popularity of Family History Using Digital Traces" that gave me the complete run down on the presentation by Arnon Hershkovitz, Ph.D, School of Education, Tel Aviv University, Israel. This is not the first, neither will it be the last of the posts I do on this subject.

The issue is quite simple. Is or is not genealogy (or Family History or whatever) one of the most popular pursuits in the United States (World or again, whatever)? Just in case you want to know where this whole idea comes from here is a quote from a not too recent ABCNews blog post dated 24 October 2012:


Genealogy is hot. The same hobby that once was the preferred pastime of shut-ins, spinsters and confirmed bachelors has become widely popular. "It's no longer a niche," says Tim Sullivan, CEO of Ancestry. He tells ABC News the site now has more than 2 million paid subscribers. Ancestry will report a billion dollars in revenue for 2012. "There's a broad, mainstream interest in family history," Sullivan says.

Hard numbers are difficult to come by, but hobby experts believe that genealogy ranks second only to gardening as American's favorite pastime.

Isn't this just another of those who cares sort of issues? Do we really care whether or not genealogy is considered a hobby? The reasons I care are rather complex. I guess a threshold issue is whether of not we want genealogy to be popular? Should we be seeking popularity or competency?  Isn't an "everyones doing it" campaign sometime self defeating? Isn't claiming genealogy is popular just a copout for coming up with reasonable and good reasons why people should be interested?

Well, back to the post on Arnon's presentation. What was the conclusion? I will let you read the entire article for yourself, but the conclusion was decidedly mixed. But as for Google Trends:


Trends were studied in over ten years in English speaking countries and by states in the US. These data indicate a decrease in the trend to search “genealogy.” One theory for the reason is the growth of many other sources to search instead of Google. The disparity among the states in the US in 2004 has virtually disappeared now – probably because of the equalizing of Internet access in all states.

Other indicators such as published book contents of genealogy also declined. If you are inclined to promote genealogy and discount any indicators of a drop in interest, all of the findings can be argued away as caused by some other factors.

I recently quoted some statistics printed in the Deseret News offered by Elder Allan F. Packer on the Family Discovery Day dated 10 February 2014:


Past approaches in the Church have resulted in less than 3 percent of members submitting names of ancestors for temple ordinance work, Elder Allan F. Packer of the Seventy said Feb. 8 at a session of the RootsTech family history conference in Salt Lake City... "These numbers are a cry for change,” Elder Packer said regarding the statistics he cited, though he did say he was happy to report progress. “In the last year the number of members submitting names for temple ordinances is up 17% over last year. It has gone from 2.4 to 2.7 percent of the members,” he said.

Meanwhile, here is the latest graph of the searches for the word "genealogy" from Google Trends" 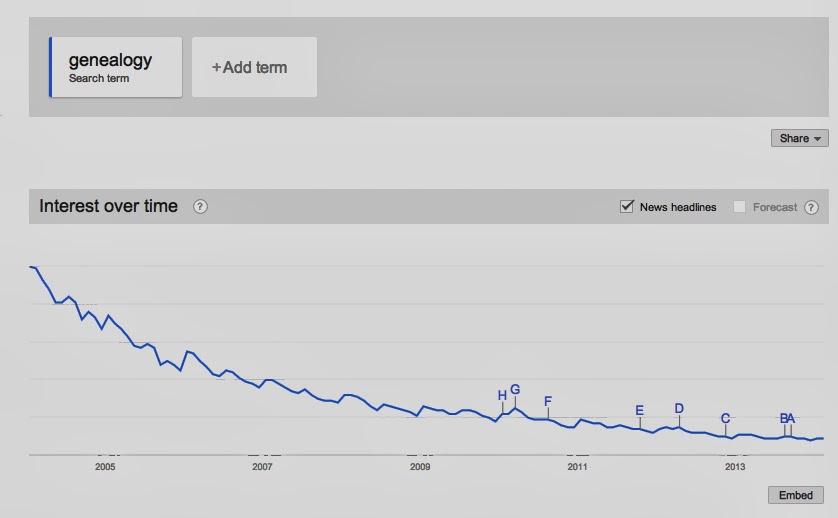 Now, to why this is important. Put simply, as Elder Packer is quoted above, these numbers to do bode well for any dramatic increase in interest in genealogy. I will be examining this issue off and on and perhaps I can make some suggestions that will help to increase the interest and reverse the trends.
Posted by James Tanner at 5:17 PM