At least part of the announcements to be made at RootsTech 2014 came out in a blog post from FamilySearch.org today, 4 Feburary 2014. Here is an infographic published with the blog post: 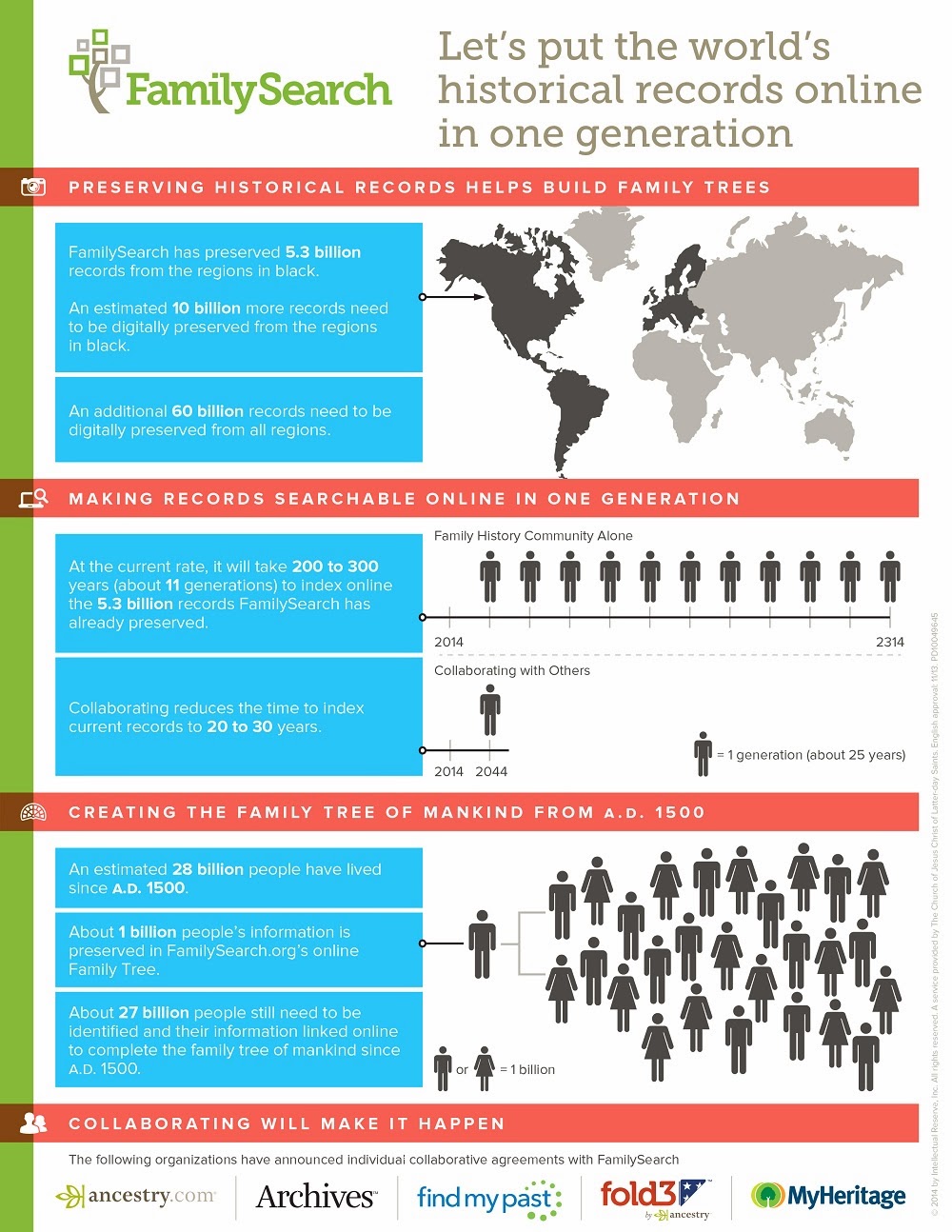 You can click on the image to see a larger size. You can see the original here. This is one of the first announcements concerning the objectives of the already announced collaboration between FamilySearch and the other large genealogy companies; Ancestry.com, MyHeritage.com and findmypast.com.

In essence, FamilySearch make a goal to put all of the world's records online in one generation. Included in the goal are two Ancestry.com subsidiaries, Archives.com and Fold3.com.  The blog post announcement entitled, "FamilySearch Works to Put the World’s Historical Records Online in One Generation," reads as follows:


FamilySearch International (online at FamilySearch.org) is leading the way in digitizing and providing access to billions of historical genealogical records by collaborating with commercial family history companies and the online community. This collaboration will carve centuries off the time needed to increase access to the world’s historical records, enabling millions more people to quickly discover, share, and preserve family memories for generations. Read more about what new and exciting things are taking place as FamilySearch International works with it’s partners to put the world’s historical records online in one generation.

I don't want to steal any of FamilySearch's thunder, but they did put this out on the Internet before any formal announcements at RootsTech 2014. In my world, the Internet is fair game for news.

Being my old picky self, I noticed a couple of things missing from the announcement, such as how they are going to do all this work even with the collaboration of Ancestry.com et al. I suppose perhaps we will hear a few more details.

If you look closely at the Infographic, you will see some interesting inclusions and exclusions. The figures quoted indicate that 5.3 billion records have already been preserved by FamilySearch. How many more are already preserved by the FamilySearch partners and how many have been preserved by all of the online record repositories in existence? For example, Trove.nla.gov.au, the Australian National Library website has 386.7 million online digitized records and the European website, Europeana.eu, has millions and millions more. There are millions of digitized and indexes records in the General Archive of the Indies in Seville, Spain. I could go on and on for pages and pages, of course. Do we include all of these other websites and archives in the world's records? Are we talking about all the world's records or only those considered genealogically significant.

The first part of the Infographic refers to 10 billion more records that need to be digitized from the Americas and Western Europe. That leaves an estimated 60 billion from other regions. That looks like 70 billion estimated records worldwide to me (I am not good at math, but this is an easy one).  But the rest of the Infographic talks about Indexing the 5.3 billion records already accumulated by FamilySearch.org. I assume most of these records are referring to the 2.4 million rolls of microfilm that are in the process of being digitized. What happens to the rest of the 60 billion or so records worldwide?

The Infographic fails to address the digitization of the 60 billion remaining records but jumps to an analysis of creating a worldwide family tree. They state that about 27 billion people need to be added to the FamilySearch.org Family Tree to put everyone on the tree. Of course, we have the claim by Ancestry.com that they have 2.1 billion records in their Public Member Family Trees and MyHeritage.com claims 1.5 billion profiles and 27 million family trees on their website. Are we counting any of those or any of the other online family trees or only FamilySearch.org Family Tree?

This is a laudable goal and one that needs to be articulated. My real guess is that given the increasing rate of digitization, most of the world's records will be digitized much sooner than the date estimated for the indexing alone. I also see that many of the world's countries are not likely to cooperate in any worldwide effort to make their records available. I'm not saying it couldn't happen, it is just that many countries are struggling with internal conflicts and wars that don't make digitization of their records a high priority not to mention religious, social and cultural barriers that make putting records online highly unlikely.

Good show FamilySearch. I am looking forward to what you have to say about all this the next few days.
Posted by James Tanner at 6:52 AM