#RootsTech and the fundamental shift in genealogy

When I was in high school (yes, I was in high school and they did have high schools when I was that age), as I was saying, when I was in high school we were in the middle of the Alfred Wegener "Continental Drift" controversy. There was a time when most of the prestigious scientists (read old and stogy) could not accept the idea that the continents drifted around on a sea of magma. Even I could see that South America fit like a puzzle piece into Africa and that there had to be a reason for that. But because Wegener was about 75 or so years ahead of his time in claiming that the continents moved, he was ridiculed and ostracized. Well, of course we all know now that Wegener was wrong. Sort of. Now we have plate tectonics, which is the same thing only with a little more detail. What happened to change all of the previous skeptical scientists? OK, for you purists, the whole theory was really thought up by Abraham Ortilius in 1596 or so. The scientists really had quite a long time to be wrong.

In my opinion, one reason the scientists did not want to concede that the continents had moved is that there is an allusion in the Bible to the fact that the lands were once all one mass and were divided. Never mind that this is a misinterpretation caused by translation errors, (now, I probably got your attention), nevertheless, the scientists (collectively speaking) could not just concede that point to the religionists. Of course, all that gets into the age of the Earth thing, which is getting me off track.

Back to my point (what does this have to do with genealogy anyway?), the main support for the entire theory of plate tectonics came with the mapping of the Mid-Atlantic Ridge, which happened about the time I was in high school. So our text books were basically a mess of pro- and anti- continental drift nonsense and had not yet been updated to include plate tectonics. I found the controversy interesting and read everything I could find on the subject.

Now to genealogy. The results of this long narrative is that I developed a rather healthy skepticism of all scientific theories. I realized what everyone thought was true one day, could all change the next day with more evidence. I also discovered from talking to my compatriots that no one else rather cared about the whole issue. Yes, I am going back to the class I attended and wrote about previously. So, I am sitting in class this past week and the instructor is referring to a document that is obviously false. But, there are probably 30 or so others people in the class and they are all just sitting there listening and not one of them was saying anything about the bogus document. Did they believe what was being said or were they just ignoring the whole thing? Same difference.

What struck me, upon reflection, was that genealogists fell into the same group as those skeptical scientists and the attendees in the class last week, with one important difference. Most of the scientists, not all, accepted the "new" theory as soon as there was some empirical evidence to support it. Now, all the high school textbooks have sections on plate tectonics (they do teach science in high school, don't they? Maybe not). Anyway, The whole evidence thing is still generally an ongoing issue with genealogists whether we know it or not.

As genealogists, we are under going our own continental drift/plate tectonics issue. Our entire way of approaching the subject of searching for historical records is radically changing and most (I would rather say, nearly all) of the researchers I talk to are entirely unaware of the change. This is sort of like my fellow classmates in high school and the continental drift controversy. So what is the overwhelming evidence of the change? RootsTech 2014. Here is one piece of the evidence: 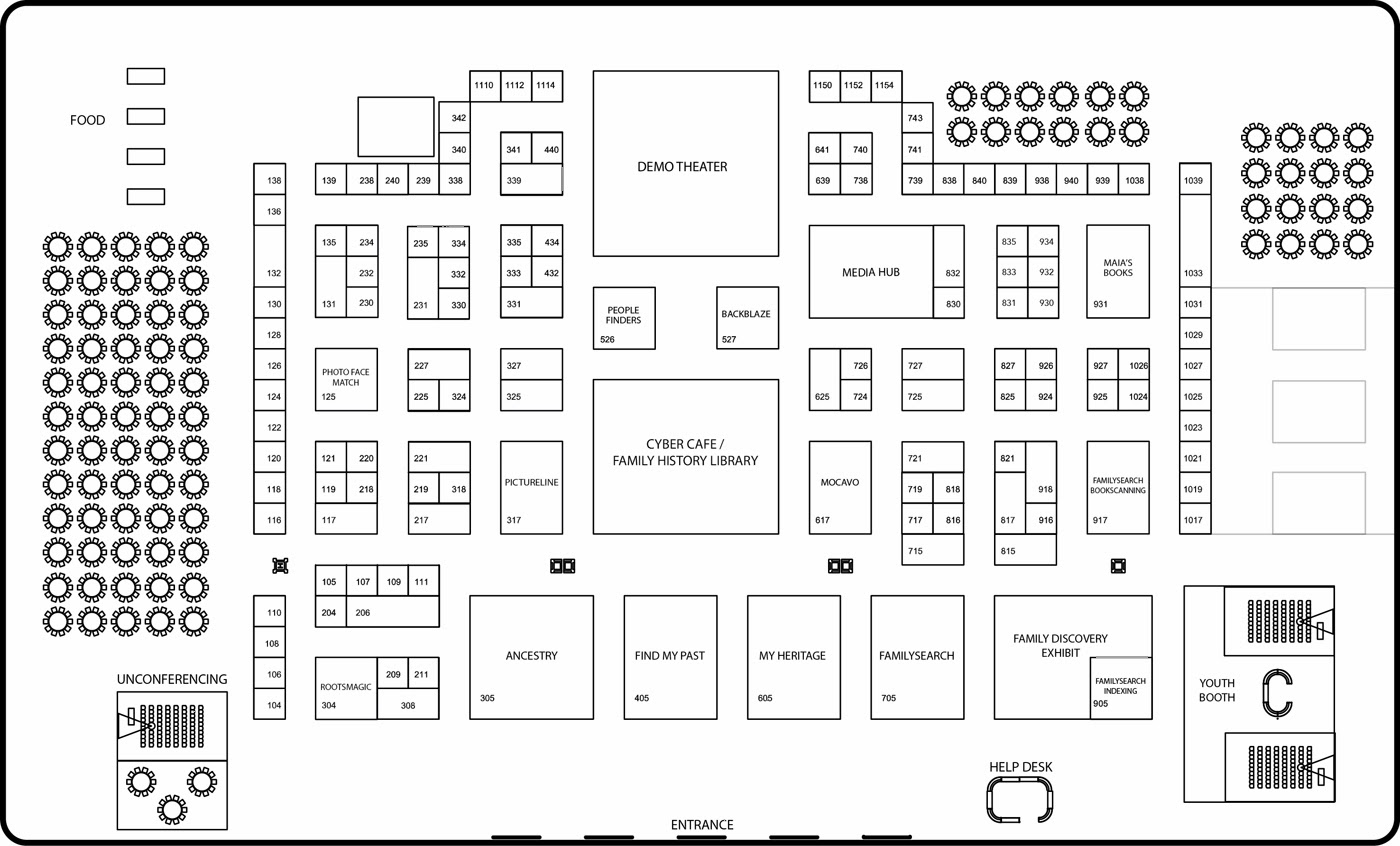 This happens to be a map of the Exhibitors Hall for RootsTech. See the connection between the map of the world and the continental drift theory and etc? You don't? Well let me explain.

Across the bottom of this map are four large square representing four large online genealogical database companies; reading left to right: Ancestry.com, findmypast.com, MyHeritage.com and FamilySearch.org. Now we are all in the same position as the pre-plate tectonics scientists looking at a map of the world. We can see that the map supports a different world view than we presently have, but we reject the evidence out of adherence to tradition.

Since you are probably hopelessly lost by this point. I will now explain as clearly as I can what is going on. We have these four (and maybe soon to be more) huge online database companies. At least three of those companies are actively developing automated search engines that connect a local genealogical database program directly to their online resources and provide a way to automatically search records to find sources to attach to individuals. One example. Ancestry.com, the largest of these companies has a search engine that connects individuals in your online family tree to records in their database (read collections). They show you these connections with little shaking green leaves. When you click on a leaf, you can see extracted information from the suggested record and selectively add that information to your own record, if you think the right source has been selected. Then, if you have a lick of sense, you will examine all the records and change your entries in your family tree to reflect the "real" evidence provided to you by Ancestry.com. You can then purchase a program called Family Tree Maker and download or synchronize your now local database with your online family tree. Essentially all of the bread and butter type source records, such as U.S. Census records, etc. are automatically included. All you have to do to do your genealogy is click on green leaves.

Now, three of these companies lined up across the entrance to the Exhibit Hall in RootsTech are doing exactly the same thing. All have automatic or semi-automatic suggested source discovery and all have associated programs that capture all of the information provided and all of these four companies are talking to each other about sharing their databases in some form or another. So, in the past two weeks or so, you can now search a huge number of FamilySearch.org collections on Ancestry.com and this will likely increase dramatically, with more and more records being made available (after indexing) to automatic searches. So what if you are using a program that doesn't allow this to happen? That is an interesting question. If you are a software developer, how do you compete with programs that automatically find sources? That is another interesting question.

Never mind the issue of how accurate or inaccurate the searches made by these companies may be presently, what is already evident is that they are accurate enough to supply a basic set of documents to most people who fall within the holdings of the various companies. But what about the rest of the records in the world? Don't we still have to do our genealogy in a traditional way? The process is far from complete outside of a rather focused area of the world right now, but remember, FamilySearch has been collecting records for many, many years and those records are being indexed at an increasing rate and all those records are now beginning to show up in collections outside of FamilySearch or whatever other arrangements are made. You might also note that these large companies are each acquiring records at an every increasing rate. There are a finite number of records ergo, if this digitizing keeps going, most of the world's records may become digitized.

So, how does this relate to my example above. Most of the genealogists are in the position of the anti-continental drift scientists. They can see the evidence but they refuse to see the change in the theories. Genealogists can look at the map of the Exhibit Floor and fail to see the significance of the four large squares at the entrance. This is where genealogy is going. For the time being, the companies that are involved with genealogy and unconnected with the large databases, will likely survive for a while, until at some point they wake up to find they have no market for their products.

Let me give a final hypothetical situation. The year is 2015 and we are all going to another, even bigger, RootsTech conference. The past year has seen an acceleration in the ability of the big four to acquire digitized records. FamilySearch has made significant progress in digitizing and uploading millions upon millions more records. Even more records have been indexed. You are just now beginning your genealogical adventures and investigating your family. How do you go about getting started? If you are aware what is going on, you purchase or download for free a program connected to a large online database program. You start filling in your family tree and immediately, the program begins to suggest records to look at about your family. You add the records as sources and using the newly acquired information, you start building your family tree. Within a very short time, you have a basic four generation family tree with sources.

Now, I am fully aware that this scenario only presently applies to a rather narrow segment of the world's genealogists, but what is keeping this method of working on genealogy from becoming nearly universal? Only the time and resources it takes to digitize existing records and we already have a rather extensive core of available records that only need to be digitized from existing microfilm.

What will it take for you to see that there has been a fundamental shift in genealogy?