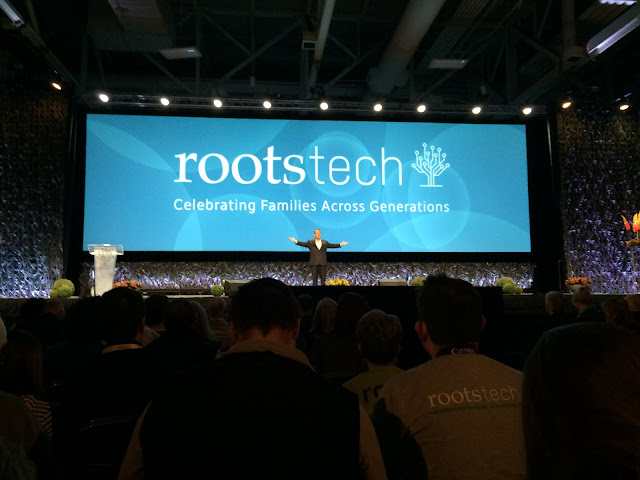 This is the sixth year of the #RootsTech Conference. I have attended all six of these events. During the Conference, I was reflecting on the contrast between the first Conference and the one held in 2016. The differences are very complicated and involve more than merely the number of attendees, classes, vendors and space in the Salt Palace in Salt Lake City, Utah. In many respects, the changes to the Conference reflect actual changes in the genealogical methodology and in the composition of the genealogical community.

The most remarkable differences involve the tremendous technological changes that have occurred in the last six years. Six years ago, FamilySearch.org was still using new.familysearch.org and the Family Tree was still under consideration and construction. MyHeritage.com was just beginning to make an impact on the North American market and the idea of Record Matches and SmartMatches was still in future. In 2009, The Generations Network, changed its name to Ancestry.com.

I am not going to dwell on the physical facility or organizational differences. The very first RootsTech Conference was fairly laid back and I had plenty of time to go to classes and mingle with the other bloggers. In this way, the contrast with the most recent Conference is dramatic.

The real differences begin with the involvement of the companies with FamilySearch. In contrast to earlier years, the booths occupied by the large company vendors are high tech with large display screens and extensive provisions for presenting classes. The vendors previously relied on give-aways to attract visitors. The main attraction to the attendees presently is the opportunity to ask questions and receive training. Support dominated the entire Conference. By the way, the years that RootsTech has been held encompass almost the entire history of plasma TVs. They were introduced shortly before 2009, peaked in their sales and now have been discontinued by almost all manufacturers. Whole technologies have come and gone during the six years of RootsTech.

The early Developer's Day activities in the early RootsTech Conferences is a far cry from the high level of involvement and interest in the Innovator Summit and the Innovator Showdown. The results of this increased emphasis was a marked increase in the sophistication and utility of the products on display. A couple of years ago, I was one of the judges for the competition. The prizes were nominal and the programs we considered, with a few notable exceptions, were mostly proposals rather than finished programs. This year's competition was fierce and involved fully developed programs with huge potential. As a side note, despite the finished state of the programs, it still appeared that some of the developers had not done much market research and did not have very robust marketing plans. They were still in the "if you build it, they will come" level of marketing and this was similar to past years.

Back to technology. Many of the technologies that were of the most use to the attendees did not even exist at the time of the first RootsTech Conference. One of most notable changes over the six years of RootsTech was the development of mobile technology. The iPhone had only been in production for two years and Android smartphones were first released just one year before the first RootsTech in 2008 but did not gain in popularity until 2010.  See Wikipedia: Smartphone. This year, smartphones used as cameras were everywhere and most of the venders with computer programs were touting their mobile apps.

Social networking played a huge part in the products and conduct of the Conference. Just so you can get some perspective of where we were back in 2099, look at the date that these three popular programs were introduced:


The Pew Research Center in an article entitled, "Social Media Usage: 2005-2015" shows that Adult usage of social media was only at 38% of all Americans in 2009. By RootsTech 2015, social media usage among all adults had grown to 65%. This made a tremendous difference in the conduct and atmosphere of the conferences. For example, this year my wife and I kept track of each other using text messages for the first time. My wife has only become immersed in the text world in the last year or so.

My involvement in the Conference has become more intense every year. Blogging, per se, has probably decreased in its influence and importance, but the other social media outlets have increased considerably. I find it interesting that in LinkedIn, my highest ratings are for social media. I now commonly receive messages by voice telephone, text, Facebook, and blog comments. One dramatic changes is the fact that FamilySearch has seen it necessary to include non-genealogists as media Ambassadors.

In future blog posts, I will be discussing the tremendous changes that are going to occur in the world of genealogy during the coming year. I can say with certainty that RootsTech 2017 will be even more intense and reflect more changes than anything we have seen yet.