Each of the states has developed its own court system with its own rules of procedure and each state has its own set of laws as administered by its courts. The Privileges and Immunities Clause (also known as the Comity Clause) of the United States Constitution, Article IV, Section 2, Clause 1, mandates that the states treat citizens of each of the other states the same way it treats its own citizens. The Clause reads as follows:


The Citizens of each State shall be entitled to all Privileges and Immunities of Citizens of the several States.

As the various states have disagreed about the interpretation of this Clause, ultimately, the United States Supreme Court has made a series of decisions that have clarified and expanded this particular provision. This does not mean that all the states have to have the same laws and court procedures, but they cannot attempt to change or modify the laws in effect in other states. For example, a state cannot pass a criminal provision in one state that would apply only to citizens of the other states or pass a law restricting the travel of citizens from other states, i.e. require passports or visas to enter a state.

For genealogists (and attorneys also), the diversity in laws and court procedures between the various states can be very challenging. In fact, attorneys are only allowed to practice law in the states where they are "admitted" by the rules of the courts, to practice. So, even though I was admitted by Arizona Supreme Court to practice in Arizona, I could not practice law in any other state unless I complied with their local rules and was admitted to practice. This makes it very difficult for lawyers to move from one state to another. I only did so after I retired from my own law practice.

Notwithstanding the diversity of laws and procedures, court records are extremely valuable for providing insights and information into families from the earliest colonial times.

Any explanation of the types of courts in the various states has to either start with the very local courts and follow the court system upward to the various supreme courts or start with the supreme courts and worked down to the lowest courts. Courts can also be classified by their jurisdiction, or ability to decide certain types of cases. Jurisdiction can be limited by the type of cases the courts can decide, the amount of money or property claimed that they can consider or they can be restricted to a certain geographical area.

One major division between the courts throughout the United States is between "courts of record" and "courts not of record." This does not mean that the courts do not keep records of their court actions and decisions. This distinction is between those courts where the judges have to explain and justify their decisions in writing. Only the "appellate" courts including the supreme court of the states are considered "courts of record." All of the written decisions of these higher courts are a matter of record. The accumulation of all of the decisions of all of the states constitutes the large body of "Common Law" used by all the courts and the attorneys to decide how to rule in similar cases. Writing legal briefs (arguments) involves researching the older court decisions. These cases are maintained in huge sets of books called the state recorder system. Presently, all of these accumulated cases are available electronically from huge online legal database companies such as WestLaw.com and LexisNexis.com. Here is an example of case reported from the Arizona Court of Appeals where my father and I represented our client: 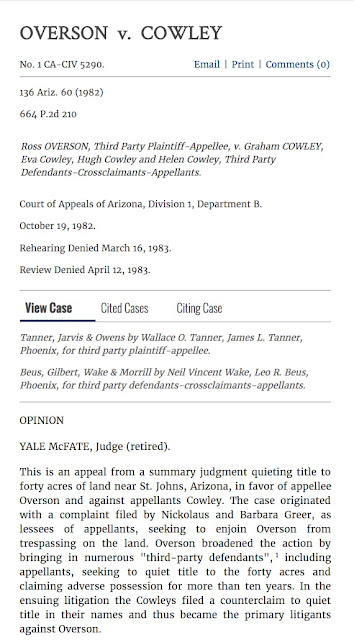 From a genealogical standpoint, both the records that survive from the lower courts (not of record) and the courts of appeal are valuable documents. Many of these cases are completely and freely available online if you search for them. If you are interested, you can find a number of cases I handled by doing a Google search for my name "James L. Tanner" and the works "court appeal" or something similar. Each of the cases in all the states has its own specific citation. For example, the legal citation for the Overson case is: Overson v. Cowley et al., 136 Ariz. 60, 664 P. 2nd 210 (1982). Most courts have their own conventions for citing cases but they are generally uniform around the entire country.

Here is another case as an example. 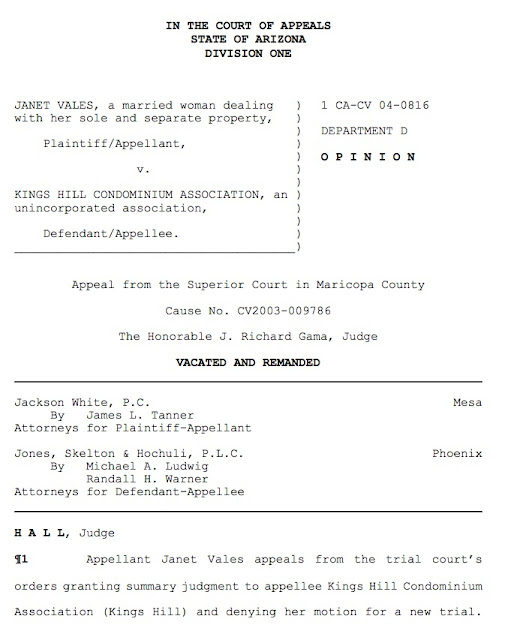 Here are the various levels of courts as commonly found within all of the states. The names of the courts and their specific jurisdictional provisions may change considerably from state to state.

These lower courts have their own judges and court personnel sometimes referred to as magistrates.  Most states have some local or municipal courts with very limited jurisdiction. For example, a municipal court may only hear or decide cases that involve the violation of city or municipal ordinances such as keeping animals, parking violations, local traffic laws and so forth. If the city or municipality is very large, they may have several divisions of their courts to hear or decide different types of cases. So there may be a dedicated traffic court or there may be a court where only domestic disputes are heard. If a claim or controversy exceeds the jurisdiction of a local court, the can refuse to hear the case and the claimants must file in the next higher court or in the court that has the specific jurisdiction to hear that type of case or determine the amount in controversy. The records of these lower courts may or may not have been preserved. If you have been in a court in the United States, you were most likely to have been in a municipal traffic court.

The jurisdiction of these courts is usually limited by geographic area and the amount of the claims allowed. Some of these courts may be limited to claims no larger than $500 for example. In some states, Justice Courts may have jurisdiction over matters where the damages in controversy are as much as $20,000 or more. The judges in these courts are often called "Justices of the Peace." These courts can hear almost any type of matter as long as it does not involve real property issues or exceed the monetary claims. The records from these courts are more usually available than the local or municipal courts.

Every state has a trial court of general jurisdiction. The names and divisions of these court vary considerably. Here are some of the names used for these courts across the country:


These courts can hear any case or controversy covered by state law however, most of the states have a number of specialized divisions of these courts for specific matters such as probate, juvenile matters, divorce or family matters, and so forth. There is a long list of these divisions in a Wikpedia article entitled, "List of courts of the United States."

Most of the courts allow appeals of their decisions to a higher court. For example, if you do not agree with the decision in a Justice Court, you may be able to appeal to the general trial court. But the Appeals courts in each state are those that hear appeals from the general trial courts. These are the courts of record and the decisions of the judges are recorded and maintained in the national reporter system of records. As I already mentioned these are the most easily located of all court decisions.

Each of the states has its own state supreme court. These courts are those of last resort. The supreme courts hear cases that are appealed from the rulings of the Appeals courts. They also hear a very limited number of cases that are filed directly in these courts depending on the unique laws of each state. All of these supreme court decisions are also preserved and reported in the national reporter system.

Here are a list of resources that give the history and organization of the state and local courts in the United States.