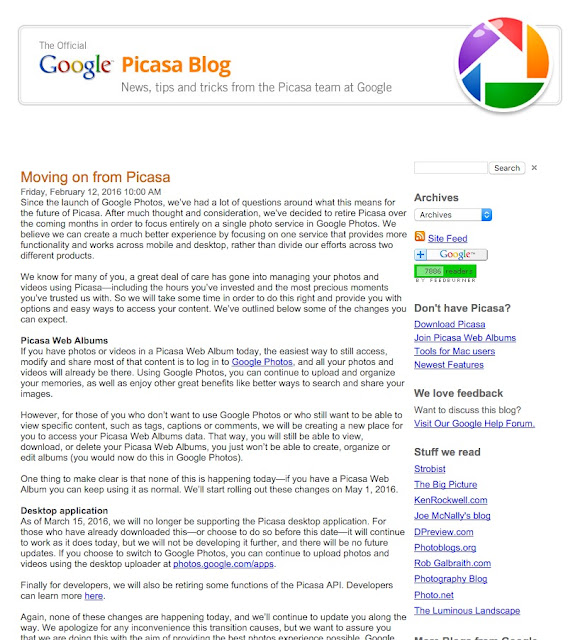 The Internet is buzzing with news that Google has decided to abandon the desktop photo tool Picasa. For a number of years, Picasa has been a useful tool for finding and organizing photos on desktop computers, now, the product is to be abandoned in favor of Google Photos. I rely on Picasa to tame the huge collection of photos I store on my computer's hard drive and attached hard drives. One of the most valuable of the Picasa tools is the ability to tag people using a face recognition feature. It also allowed users to rename and sort photo on the user's computer. These features, including some of the fairly sophisticated editing tools in Picasa are now on the cutting table.

Google Photos is a weak substitute even with the ability to store "unlimited"copies of lower quality photos online. I archive my files at the original quality supported by the camera. In the case of many of my photos taken with my Canon Camera, I have rather large RAW files. If I want to use Google Photos, I must compromise the quality of my photos, even the JPEGs and upload a compressed version. Otherwise, I must utilize the storage incorporated into Google Drive and limited to a total of 1 TB. This may seem like a lot, but I will now seriously consider moving to a more reasonable online storage program. For example, Amazon.com allows unlimited photo storage to Amazon Prime members and we already have Amazon Prime for the advantage in the savings on shipping costs and other services.

As far as sorting, renaming and moving photos, I can do that with either Adobe Lightroom or Adobe Bridge which comes with Adobe Photoshop. But neither of these Adobe programs have facial recognition.

Recently, the genealogy community was notified of the abandonment of Family Tree Maker by Ancestry.com. The excuse given, in part, was the move from desktop to cloud services. Picasa was already a cloud service but storage on Google's servers was optional. Now with the move away from Picasa, there is no longer an option. You will not see Google Photos without a network connection. Here is a quote from the Google announcement:


If you have photos or videos in a Picasa Web Album today, the easiest way to still access, modify and share most of that content is to log in to Google Photos, and all your photos and videos will already be there. Using Google Photos, you can continue to upload and organize your memories, as well as enjoy other great benefits like better ways to search and share your images.

This is not exactly correct. I do not have all the thousands of photos I now organize on my computer using Picasa online. What Google does have is a copy of photos I have uploaded using my iPhone or some of the photos used in my blogs. Even with my Google Fiber connection here in Provo, Utah, it would take more than an entire day to simply back up my existing photos.

Just as with Family Tree Make, the desktop programs do not automatically stop working. Here is the explanation from Google:

As of March 15, 2016, we will no longer be supporting the Picasa desktop application. For those who have already downloaded this—or choose to do so before this date—it will continue to work as it does today, but we will not be developing it further, and there will be no future updates. If you choose to switch to Google Photos, you can continue to upload photos and videos using the desktop uploader at photos.google.com/apps.

These new developments with Ancestry.com and Google clearly illustrate the limitations of relying solely on companies whose internal business decisions may affect your data.  For the foreseeable future, there is still a need to provide you own local backup storage on external hard disks. Online storage is only one more way to backup your data and not the ultimate solution.
Posted by James Tanner at 7:05 AM