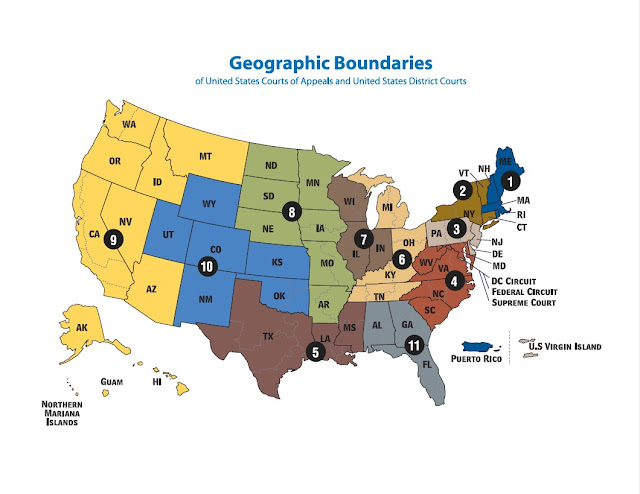 This post is part of a loose series on the genealogical uses of court records. The posts are connected only by the tag line: Genealogical Insight.

The United States Federal Court system has it beginnings in specific provisions of the U.S. Constitution particularly Article III, Section 1:


Section 1.
The judicial power of the United States, shall be vested in one Supreme Court, and in such inferior courts as the Congress may from time to time ordain and establish. The judges, both of the supreme and inferior courts, shall hold their offices during good behaviour, and shall, at stated times, receive for their services, a compensation, which shall not be diminished during their continuance in office.

A further short expression of the judicial power of the courts is set forth in Article III, Section 2:


The judicial power shall extend to all cases, in law and equity, arising under this Constitution, the laws of the United States, and treaties made, or which shall be made, under their authority;--to all cases affecting ambassadors, other public ministers and consuls;--to all cases of admiralty and maritime jurisdiction;--to controversies to which the United States shall be a party;--to controversies between two or more states;--between a state and citizens of another state;--between citizens of different states;--between citizens of the same state claiming lands under grants of different states, and between a state, or the citizens thereof, and foreign states, citizens or subjects.

The trial of all crimes, except in cases of impeachment, shall be by jury; and such trial shall be held in the state where the said crimes shall have been committed; but when not committed within any state, the trial shall be at such place or places as the Congress may by law have directed.

From this basic outline, the U.S. has developed a highly complex organization involving thousands of people, hundreds of judges and a formidable adversary system in the three branches of the federal government. The federal judiciary has taken and continues to take a very active part in shaping the laws and procedures of the entire government.

From a genealogical standpoint, the federal court system has generated a formidable body of documents, that are more or less available for research. It would seem that finding your ancestors were entangled in federal litigation would be a rare event. But in reality, it was not uncommon for ordinary citizens of the United States to have some type involvement with federal court matters. At least two of my own ancestors were involved in federal criminal prosecutions and I am beginning see how others may have been involved in different ways. If any of your ancestors were lawyers, judges or otherwise associated with the court, they will also be memorialized in court records.

There are three main divisions of the federal court system and several semi-independent branches. At the top of the federal court system is the U.S. Supreme Court. According to 28 U. S. C. (United States Code) Section 1 the Supreme Court consists of the Chief Justice of the United States and such number of Associate Justices as may be fixed by Congress. The number of Associate Justices is currently fixed at eight. The current system of lower courts consists of 94 district level trial courts called the District Courts organized into 12 regional circuits and 13 U.S. Courts of Appeals. There are also a number of special courts:
There is also a system of federal Bankruptcy Courts. For more specific information about the court system see United States Courts, Court Role and Structure. The federal courts have jurisdiction over the following types of cases:
More specifically, federal courts hear criminal, civil, and bankruptcy cases. And once a case is decided, it can often be appealed. See United States Courts, Types of Cases.

During my years of legal practice as an attorney in Arizona, I had hundreds of opportunities to appear in various federal court matters involving criminal matters, illegal immigration matters, bankruptcy, copyright violation claims and diversity claims.

Some of the records of the federal courts are available online. For example, all of decisions of the U.S. Supreme Court are online either directly from the Supreme Court website, however, other court records may or may not be readily available. The location of the court records is primarily controlled by the U.S. National Archives. See U.S. Court Records Held by the National Archives. There is also a good discussion about U.S. Court records in the FamilySearch.org Research Wiki beginning with the article entitled, "United States Court Records." I heartedly agree with the following statement from the Research Wiki article:

Unfortunately, court records tend to be difficult to use. The records are usually not well-indexed, there are many records, court names and jurisdictions changed, and they use many legal terms and abbreviations. To interpret court records you may need to consult a dictionary, such as:

Many of the federal court records are available through large online databases. Some of these are subscription websites such as WestLaw.com and LexisNexis.com that have huge collections of federal court cases and other material. These particular services are extremely expensive and are available primarily to law firms, corporations, government agencies and academic institutions such as law schools. You will need to investigate the availability of any of these services to you as an individual. However, there are a lot of documents also available and scattered across the web. It will take some degree of sophisticated searching to find these records, but they are available.
Posted by James Tanner at 9:59 AM