The Fate of Family Tree Maker - Relives at MacKiev 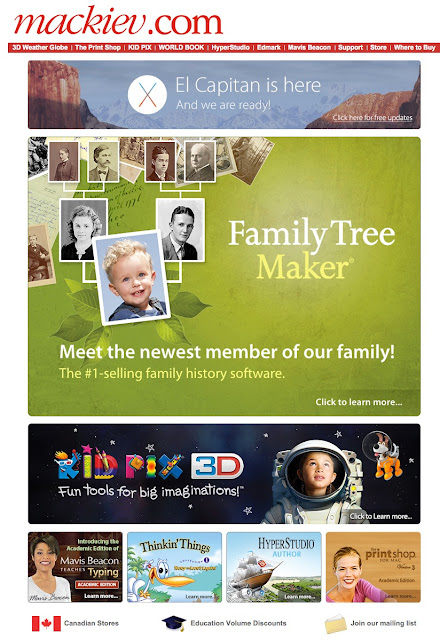 Family Tree Maker, the program abandoned by Ancestry.com has found a new home with MacKiev.com and it looks like a few old standby programs have also. The programs listed on their website include the following:


If you have been around computers and especially Apple computers as long as I have, you will undoubtedly recognize some or all of these programs.

Software MacKiev is a company specialized in consumer and educational software development and publishing for Macintosh, Windows, and mobile platforms. Headquartered in Boston, Massachusetts, Software MacKiev has its main workshop in Kiev, Ukraine.

The company's products are described as follows:

In addition to developing Macintosh, Windows, iOS, and Android software under contract for other software companies, Software MacKiev publishes its own consumer and education software titles including HyperStudio (Acquired from Sunburst Technologies in 2007) and KID PIX (Acquired from Houghton Mifflin Harcourt in 2011). The company also publishes selected titles under license from World Book, Inc. and Houghton Mifflin Harcourt.

According to Manta.com, the company was established in 1997 and incorporated in Massachusetts. Current estimates show that Software MacKiev has an annual revenue of $1,400,000 and employs a staff of approximately 12.

MacKiev.com also has a long list of Frequently Asked Questions about Family Tree Maker. I would strongly suggest that if you have the program, you review this page. It will likely answer most of your concerns.