Why are Vital Records Vital to Genealogists? Part Four -- Births, Christenings and Baptisms

It is probably obvious that babies have been born since man has lived on the earth, but genealogists seem to frequently forget the First Rule of Genealogical Research. The FIRST RULE is;

When the baby was born, the mother was there.

You might have to think about the implications of this Rule for a while, but it does affect almost all aspects of genealogical research. The first and foremost issue raised by the First Rule is that geography plays a preeminent position in any research effort. Fathers have always played a major role in genealogical research, but the fact is that fathers can be anywhere, even in a different part of the world (or now even in space), when a baby is born. This First Rule also brings up the issue of the endless unspecified places I see in online family trees. Here is a common example from the FamilySearch.org Family Tree. 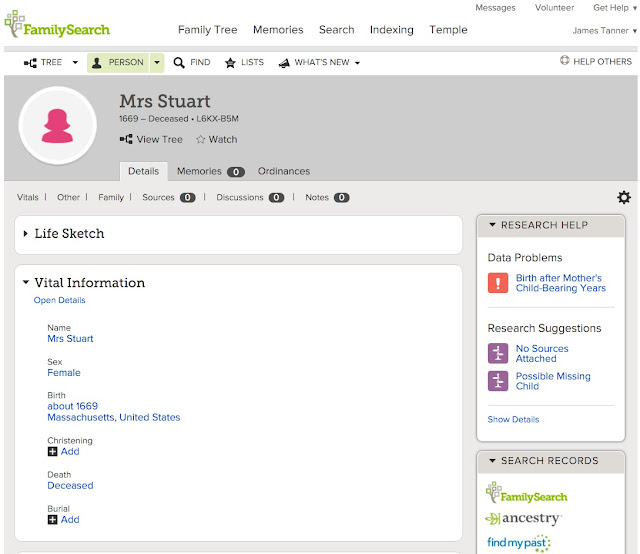 Based on this sterling example of competent research, this line immediately goes back to English Royalty. I must comment on the date, the places listed and the fact that this person is believed to be deceased. If you cannot see anything wrong with sticking this type of entry into a public online family tree program, then you need to read some history and geography. No, really, I suggest you start with the following books.


Mackenzie, George Norbury, and Nelson Osgood Rhoades. Colonial Families of the United States of America: In Which Is given the History, Genealogy, and Armorial Bearings of Colonial Families Who Settled in the American Colonies from the Time of the Settlement of Jamestown, 13th May, 1607, to the Battle of Lexington, 19th April, 1775. Baltimore: Genealogical Pub. Co., 1966.

Back to births, christenings and baptisms. I cannot count the number of times I have talked to researchers who are obsessed with finding a birth record. The reality is that many, probably most, births before 1900 went unrecorded. Even today, there are many places in the world where births are not necessarily recorded. This brings us to the use of records that may contain birth information. The FamilySearch.org Research Wiki lists several alternate places to look for birth information. Here is the list including the links to the Research Wiki pages that discuss the alternate sources:

Of all these types of records, church records are the most reliable and available. In European countries and in any country where the people are predominantly members of the Catholic churches or Protestant churches, nearly all of the babies were and are baptized or christened shortly after birth. The terms baptism and christening in this context refer to the same ceremony. The christening refers to the practice of giving the baby a Christian name at the time of the baptism. Christening or baptismal records do not necessarily record the date of birth, although many do. The Christening record may be the only reference to the birth of the child.

If you go back in time doing genealogical research about your family, you may run across documents where your ancestors signed a document using an "X" mark. This means that they could not write their own name. It also means that they did not leave any personal, written records, including birth records. In these cases, the researcher needs to assume the baby was born if there is a later record of the person's existence and use the alternate birth records to estimate a date of birth. It may seem overly obvious, but the fact that a person was married or died implies that they were also born.

During a time and at a place where birth records should exist, I find the next biggest obstacle to research involves searching in the wrong place. From Biblical times, expectant mothers have been known to move to places where their close relatives lived to give birth, so the place of birth may not be the primary residence of the family. This is fairly common. I was born in Utah even though almost my entire family came from Arizona because my mother "went home to her mother" to have a baby.

Christening records are usually found with other church records of marriages and deaths. It is likely that the common church policies of keeping such records contributed to the idea that these types of records are "vital." Even church records tend to become scarce as you go back further into time. In England, for example, very few church records exist before 1538 A.D. Quoting from Wikipedia: Parish register:

On 5 September 1538, following the split with Rome, Thomas Cromwell, Henry VIII's Vicar General, ordered that each parish priest must keep a book, and that the Parson, in the presence of the wardens, must enter all the baptisms, marriages and burials of the previous week. The book was to be kept in a "sure coffer" with two locks (one key for the vicar, the other for the wardens). A fine of 3s 4d was to be levied for failure to comply. Many parishes ignored this order, believing it to be the forerunner of some new tax.

For genealogical researchers, the 1538 date becomes a watershed. Before that time in England, there are very few records of births, deaths or burials. Notice that the records kept are of burials, not deaths. In the past, burials occurred shortly after death. So, we have christening records not necessarily birth records and burial records not necessarily death records.

From a researchers standpoint, parish registers become the main source of vital record information in nearly every European country and in any part of the United States where these records may have been kept and preserved. Here is an example of a parish register entry for births from England in 1813.

Contrast this with this image of a Catholic parish register from Mexico in the 1800s.


The English parish register is on a printed form. Of course, earlier records are not, but the Mexican record is also a form, just not printed. You will find that parish records are all entered in the same form. The handwriting and the legibility of the records due to fading or destruction of the records may become a major factor, but the records themselves are usually consistent in the information preserved. If you would like to see a record that is more difficult to deal with, see the following example from 1691;

Discovering baptism and christening records can be challenging due to the language and condition of the text.

Here are the previous installments of this series.