I can use my iPad for genealogy

One development this past year that has given a new aspect to genealogical research is the introduction of much more sophisticated genealogy apps or programs on tablet computers. Earlier genealogy apps were mostly limited to "viewer" status and had no other functions than to synchronize with an online family tree or with a desktop program. One of the most dramatic changes was the fact that tablet sales are apparently eroding sales of both desktop computers and Windows Notebook computers. Here is a chart widely quoted from the NPD Group: 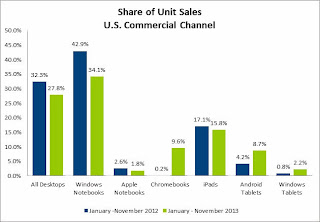 You can click on the image to enlarge it for study. Some of the things I noted were that there has been a year to year decrease in desktop sales, Windows notebook computers, Apple notebook computers and iPads, all at the expense, apparently, of Android tablets and partially due to the rise of Chromebooks from Google. The NPD Group website states:


“The market for personal computing devices in commercial markets continues to shift and change,” said Stephen Baker, vice president of industry analysis, NPD. “New products like Chromebooks, and reimagined items like Windows tablets, are now supplementing the revitalization that iPads started in personal computing devices. It is no accident that we are seeing the fruits of this change in the commercial markets as business and institutional buyers exploit the flexibility inherent in the new range of choices now open to them.”

I guess my wife and I followed the yearly trend exactly as we did not upgrade any of our desktop computers but did upgrade our iPads during the year.  As a result, I have seen both of us increase our usage of the iPads and that would reflect a direct reduction in the time spent on our desktop computers.

I would also note that the number of apps that are available for both Android and iOS devices have also increased. The number of genealogy apps on both platforms has increased to the point that it is impossible to even be familiar with the product offerings. Many of the programs or apps are free, but of course, you cannot use the ones synchronized with online databases without a subscription. For example, you can download the Ancestry.com app, but need an Ancestry.com subscription to connect with the online version. I also note that there are a lot of apps that come up in a search for "genealogy" in the Google Play store, that obviously have no relationship to the kind of genealogy we do.

If you are using either a desktop genealogy program or an online program and have a tablet, I suggest searching either the Google Play Store or Apple's App Store for apps that correspond to your device. You might be surprised. I would note that the Ancestry.com app and also the Shoebox app from Ancestry.com are both available for both operating systems. Also, MyHeritage.com has apps for both.
FamilySearch.org looks to third parties for apps that synchronize with its Family Tree program listed on its Product page for the Web. Mocavo.com may have made a huge inroad into supplying online source documents but has not yet entered the world of tablet apps.

I would also suggest that as you look at these apps on both Android and iOS devices that you examine the details of the program. Using Ancestry.com's app as an example, you will find almost exactly the functionality of the online program with the tablet (iPad) version of the program. You can add sources, edit entries and perform nearly every function of the online program from your tablet. In fact, I have yet to find any limitations.

Some of the tablet apps have a better interface than the desktop program and some are at least the same. In some cases, the programs on the tablets are more awkward than the desktop program merely because the developers have not adapted their views to the much smaller screens of the tablet computers. I suggest that all the developers should be working on enhancing the tablet experience and adapting their family tree layout to the way tablets work. I must also say at this point that the Ancestry.com app is a good example of how the interface should work. Where this is most apparent is in the family tree or pedigree view of the data.

Unfortunately the desktop genealogy software developers are being rather slow in adding tablet functionality. Only a very few of them have apps that can do anything other than act as a viewer of what you have in your desktop database. Two exception as an example, and there may be others, are the Families Android app that works with Legacy Family Tree and the Reunion app that works with iOS. Where the programs in general seem to break down is covering both Windows and OS X operating systems and then having the corresponding apps for both Android and iOS. Both Ancestry.com seems to have covered all four operating systems with devices that synchronize between the Ancestry.com programs on all other devices and with an online family tree. If you were to use the Heredis.com family tree, then that program would also seem to cover the bases. Likewise, MyHeritage.com has apps for both Android and iOS but is missing an Apple OS X desktop program.

I might note that if you have a desktop genealogy computer program all that you might care about is whether or not the program will synchronize with an app on your type of tablet and perhaps with some corresponding online family tree. It is important to keep all of these locations synchronized if that is how you are working.