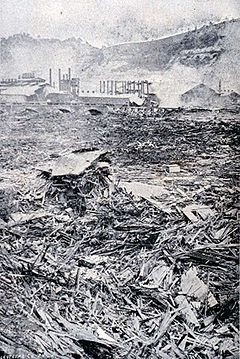 If your ancestors were living in Johnstown, Pennsylvania in 1889, they probably suffered some kind of loss or may have even been killed by what is known as the Johnstown Flood. On 31 May 1889 the South Fork Dam failed after several days of very heavy rain. In the resultant catastrophic flood, 2,209 people were killed and there was millions of dollars in damage.

As genealogists, perhaps our first impulse (depending our your degree of immersion in genealogy) would be to lament the potential loss of records. Heartless as we are, we tend to think of wars, fires, earthquakes, destructive storms and other catastrophic events as "record loss" events, often ignoring the loss of life and property. But in reality, the real disaster for genealogists is when we are researching in such a historical vacuum that we don't even recognize the disasters that have occurred in our ancestors' lives. I am continually asking people with unsolved genealogical problems about what happened to their ancestors. Why did the family move from one place to another? Almost never do I get an answer.

Collectively, we have a woefully deficient awareness of history. There are individual exceptions, bright lights of knowledge about some war or another or even about some general events in world history, but like happened yesterday, when one of my friends was researching a family in Tennessee, he had absolutely no knowledge about when Tennessee became a state, what parts of the state were previously in what other states or anything even vaguely like an idea of the historical context of the family he was supposedly researching. What's more, after a few minutes of questions, it turned out all of the place designations he had for the family were historically wrong. Neither the towns nor the counties were in existence at the time the events were recorded to have happened. Unfortunately, I did not have time to sort out the facts and had to leave him with his tangled mess.

It has been said in may contexts that we ignore history at our peril. In genealogy, we do this day after day, week after week. I am eminently unsuccessful in getting the patrons and volunteers at the Mesa FamilySearch Library to look at the overall history of the places and events when their ancestors lived. I am certain that not three out of ten could give the beginning and ending years of the American Civil War or any other war for that matter.

Disasters of whatever kind are relatively common. In 2013 for example, the Federal Emergency Management Agency (FEMA) lists almost 100 declared natural disasters. How did all those events affect the people involved? How many such events have occurred to our ancestors in the past? How many times have we researched the local history to find out about such disasters?

In my own family, I heard stories from my Grandmother about a disastrous dam collapse in St. Johns, Arizona where there was loss of life and property. How many of the descendants (even the genealogists) of those who suffered in that almost unrecorded flood in 1915.  Here is an account from a faraway newspaper the Wisconsin Daily Journal, Madison Wisconsin for 15 April 1915:


Phoenix, Ariz., April 15. -- With a terrific roar, the Lyman reservoir suddenly gave way today and sent a great wall of water racing down on St. Johns, Ariz., twelve miles below.
Eight persons are known to have been drowned, including three grandchildren of MRS. RACHAEL BARRY, a member of the Arizona General Assembly. Several persons are missing.

Two smaller reservoirs near St. Johns are weakening and are likely to collapse at any moment, according to brief advices from the scene.
The eight victims lived close under the reservoir dam which collapsed. At St. Johns the flood was three feet high and rising.

If the reservoir at Hunt, northwest of St. Johns, collapses as it threatens to do, Woodruff, Ariz., will be in great danger. The inhabitants of Woodruff have been warned to prepare for flight. Many have moved out of the danger zone already.

My Grandmother, Jessie Christensen Morgan, was 22 years old at the time and told me in a recorded interview about her experiences in seeing those who drowned in the flood.

Many of the unsolved mysteries of our ancestors' lives may not be so unsolved if we take the time to research the local history of what may have happened to cause the circumstances we now see only as names and dates. The real disaster for us today as genealogists is our lack of historical perspective. That is when a disaster is really a disaster. This also includes our lack of feeling for the tragedy of our ancestors' lives.
Posted by James Tanner at 7:34 AM