Moving beyond the U.S. Census

Some impossibly high percentage of new genealogy researchers start out using the United States Federal Census records as the only source for their research. The obvious reasons are that the records are valuable, relatively easy to use and available for free online. The budding researchers then collect a few names and dates and then ignore the real value of the census records. What are most or almost all of the researchers ignoring? From my standpoint, the main value of the U.S. Census records lies in establishing the exact location of individuals and families at a given point in time thereby opening up a broad avenue to further research.

In teaching class after class, I have come to the conclusion that the one fact that seems to escape almost all researchers is the connection between the geographic location and the origin of genealogically significant records. The rule is that most genealogically significant records are created at or near the time of an event in the then existing jurisdictional entities corresponding to the geographical location of the event. These records continue to be created as each individual progresses through his or her life.

Let's say we start with the FIRST RULE OF GENEALOGY: When the baby was born, the mother was there. So we can assume that any records created as a result of the birth, could be found in the applicable jurisdictions (i.e. city, county, state, country etc.) in existence at the time of the event. In my experience, failure to recognize this basic rule is one of the most common contributing factors to lack of progress in research. It seems so self evident that you would think that everyone would instantly recognize that the real basis for searching for ancestors should be geographically oriented rather than a rather simplistic search for names and dates. But the obvious must not be so obvious.

Going back to the U.S. Census records, to repeat, an important value of the information is that the Census gives a snapshot of an individual or family at a particular location and a defined time thereby facilitating locating additional pertinent records. One aspect of this problem is likely the lack of an historical context to the records found on the United States Census. For example, how many people can spontaneously identify significant historical events in the location where their ancestors lived during each census? Evidence of this lack of understanding is easy to find in the fact that the researchers failed to record all of the significant geographic names in conjunction with the information that they obtain from the census records. This is generally the case because the census records may not contain that information. In my own genealogy, I frequently find events that occurred in northern Arizona in 1910 as happening in the town of Joseph City, Navajo, Arizona. When the town's name in 1910 was St. Joseph and Arizona was not yet state.

So here we have a record, the U.S. Census, that provides specific geographic information concerning events that occurred every 10 years thereby creating a geographic trail can be reconstructed for every family appearing in the census records. But because of the lack of awareness of the importance of this information, very few of the researchers utilize what they already found. Let me go back to my example of Joseph City, Navajo, Arizona and the 1910 U.S. Census. 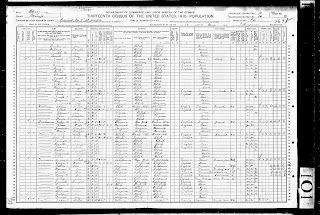 If you look at this record showing my Great-grandfather, Henry Tanner, you will find some of the jurisdictional information at the top of the page. The page identifies the state as Arizona, the county as Navajo and the town as St. Joseph. It also has a specific date of 19 May 1910. Now, it I use that information to go to the FamilySearch Library Catalog, I can do a place search for Arizona and four Navajo County and specifically for St. Joseph. In each catalog listing I will find several types of records that were created including that specific location and during the exact time period involved. A careful researcher would search all of those records for additional information about the individuals and family.

You may argue that once you have the census record what more do you need? When I am talking about my great-grandfather this may seem to be a tribunal question, but if I am researching and unknown family where I'm not acquainted with the next generation, any information that I can find out about the family will be helpful in establishing the identity of the next generation.

This whole process can be generalized into a consideration of records as "finding aids" instead of merely sources. Each record that is found then becomes the basis for finding additional records by using the information in the new record to confirm locations, dates and the names of the ancestors at a new location and date.
Posted by James Tanner at 8:27 AM