Update on FamilySearch.org -- What is happening to the Mayflower families and other changes

To use the rich text editor to edit articles on the FamilySearch Wiki, please use the most current version of Mozilla Firefox.

At various times, the FamilySearch logo and headings disappeared from the Research Wiki pages even if you were using the latest version of Mozilla Firefox. From my standpoint, the loss of the rich text editor was no big deal because I edit directly in Wikitext, but it was a topic of discussion for a while in Research Wiki support community. The good news was that the Research Wiki now has more than 76,000 articles on genealogy around the world.

It was apparent that there were changes being made to the program. New drop down menus appeared at the top of the pages on FamilySearch.org generally and the link to "Photos" changed to "Memories."
Here is a screenshot showing the change: 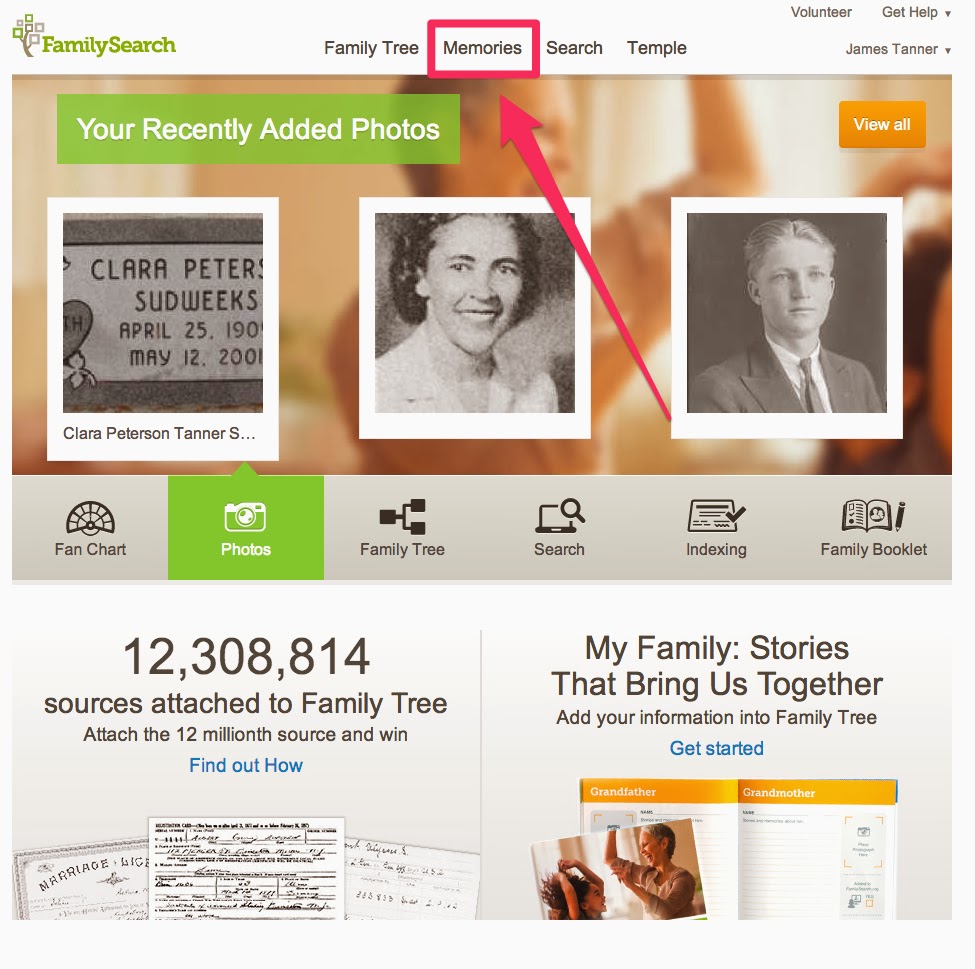 As a note, FamilySearch was promoting a contest to see who would put in the 12 millionth source and it looks like someone did that some time ago. In online websites, usually apparent cosmetic changes can be an indication that more serious changes are occurring. All in all, the website is still very much a moving target.

It has now been over a month since New.FamilySearch.org became READ ONLY and we are seeing a marked increase in questions regarding Family Tree. This is good. We do have a relatively new player for those whose family trees go back with membership in The Church of Jesus Christ of Latter-day Saints (the Church). We are now seeing changes being made by "LDS Church Membership." Here is a screen shot of a list of changes for my Great-great-grandfather, Sidney Tanner, as an example: 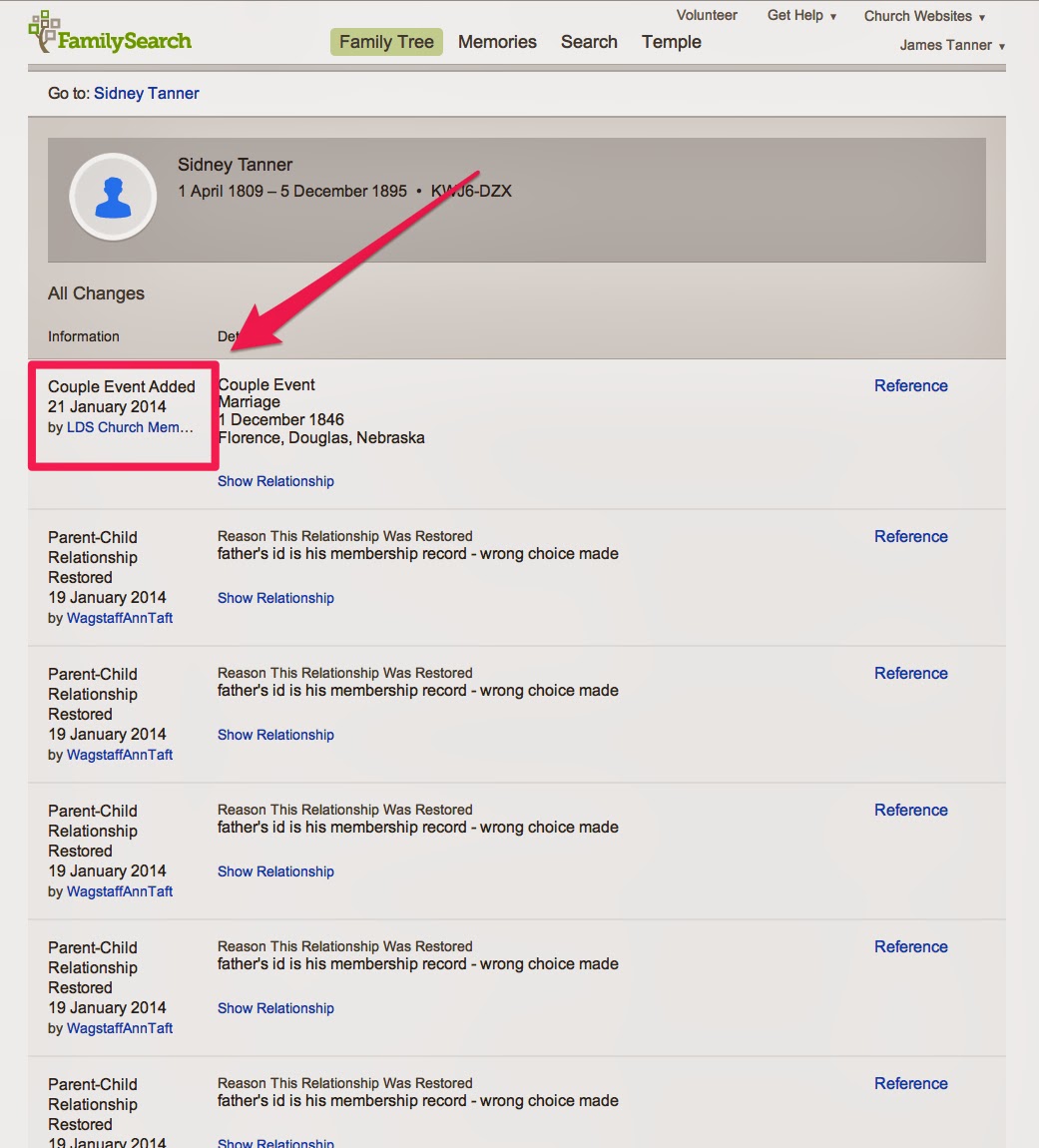 This particular change seemed to add a duplicate marriage date and place. Here is a screenshot of the "Reference" shown as a reason for the change: 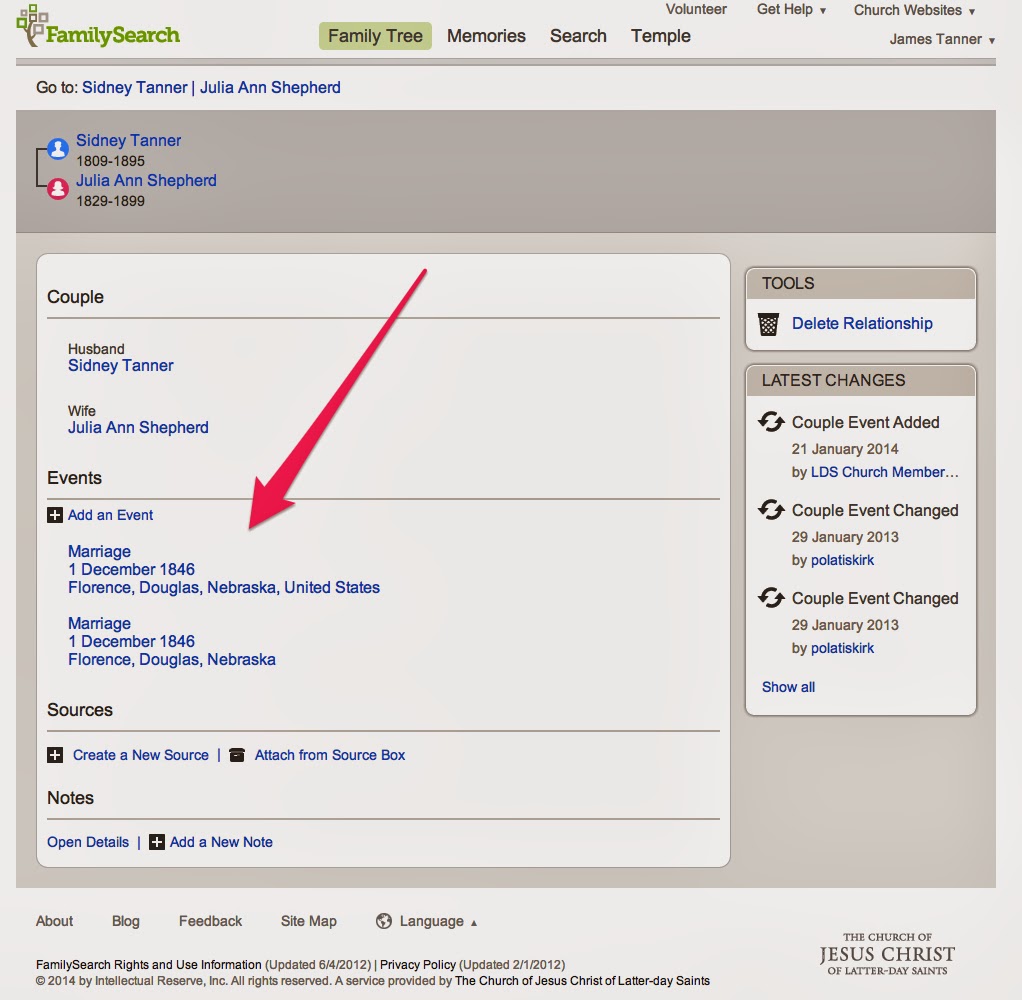 This type of seemingly random changes is creating some consternation among the Family Tree users. Most of the users are still uncomfortable with the idea that "their family tree" can be changed, much less that the changes can come from an outside entity such as the LDS Church Membership. In fact, there are quite a significant number of people working as missionaries for the Church that are trying to untangle the mess the database inherited from 150 years of submissions and record keeping.

In the past, every submission by anyone to the individual records of any family were isolated from any others. For example, if an event were recorded by a Ward Clerk and submitted to the Church Membership Records, there was no way to see if that entry was right or wrong. If the entry was wrong, it could be corrected, but the correction had to be made by the individual's own request. So what happened if the individual member died? The record was never changed. So, in my case, my parents' marriage date was recorded differently as shown by the Temple records and as shown by the Church Membership Records. In addition, when the database was created for New.FamilySearch.org, none of the records maintained by the Church Membership could be changed by users of the program. That is still the case with Family Tree. Hence, we have the LDS Church Membership coming in to made changes. How do we know they have the correct information to start with? We don't. But we have always had multiple dates for some types of records due to duplication of the LDS Temple ordinances and so that has been solved by showing only the earliest of the duplicate dates. It also looks like the dates recorded by the Temples are being used instead of a conflicting date recorded by the local Ward Clerk.

Now, the issue of Mayflower families and other Individuals of Unusual Size (IOUSs). As a brief introduction to this issue, it is important to note that over the history of submissions to the database, going back over 150 years, there were a huge number of duplicate pedigrees and family group records submitted. Depending on the accuracy of submitters, there were also numerous variations in the content of those records concerning names, spellings, dates, places etc. The original database used for New.FamilySearch.org had a tremendously large number of these duplicates. However, the program, New.FamilySearch.org, had no adequate way to handle the situation and in fact, allowed many more duplicate entries to be created. The individuals in the program with a large number of duplicate entries are referred to as IOUSs.

Without belaboring the point excessively, we fast forward to today. Family Tree is designed, in part, to eliminate that huge backlog of duplicates. It does this through a process of merging duplicate entries. But the merge function of the program is only partially functional to the user due to limitations imposed by its connection to the still existing New.FamilySearch.org program. In short, the work being done by the LDS Church Membership and others is designed to eliminate the duplicates and consolidate all of the known (hopefully correct) information on one individual entry. So, if you have ancestors that are in this category of IOUS, such as those Mayflower passengers or many, many others, you will just have to be patient until all of the housekeeping changes are made.

Now there is a danger here. In many cases, the individual showing in the program when there are multiple copies of that same individual out there floating around in hyperspace, may not be the survivor. So working with these IOUS ancestors has the risk that any changes you make could be erased by changes made at the time the multiple copies of the IOUS person are merged. Hence, some degree of frustration for those who make "corrections" only to see those "corrections" disappear.

I realize that this explanation may not be exactly, exactly what is happening in every case. There is always the possibility that one of your distant relatives is also trying to make changes at the same time you are. As for me, I have been concentrating of those parts of my pedigree that are non-controversial and ignoring the rest. But I do note progress. Many of the problems have been sorted out, but there are still, for me, some notable exceptions such as the problems still existing with my aforementioned Great-great-grandfather, Sidney Tanner with unresolved duplicate entries. As long as these duplicates exist, there is a high risk that any user made corrections will get lost as the merges are finally made.

I expect that if I have gotten any part of this explanation wrong, that I will be "corrected" at the upcoming RootsTech Conference. Or not. Depending on how busy everyone is and whether or not they care to take the time to correct a lowly blogger.