The Butterfly Effect refers to the sensitive dependence on initial conditions in which a small change in one state of a deterministic nonlinear system can result in large differences in a later state. See Wikipedia: Butterfly effect. The example used is that the movement in the air caused by a butterfly in one part of the world ultimately causing a hurricane in another part of the world. This concept is an integral part of Chaos Theory.

I see many applications of the concepts developed in Chaos Theory to the historical study of genealogical descent. At first, history can appear chaotic. Of course, as genealogists, we have the apparent structural basis imposed by our pedigree charts, but at each node on the chart, there are many seemingly randomly possible configurations of the chart. For example, a standard pedigree chart implies that each branching point represents the marriage of one male and one female ancestor. Like this screenshot from the FamilySearch.org Family Tree. 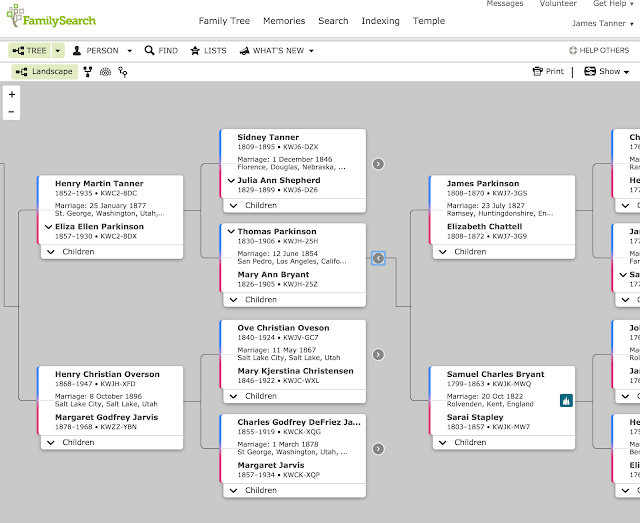 However, this commonly accepted depiction of a "family tree" is entirely misleading. At every node, i.e. the name of a person, there is the possibility of a multiple branches. In fact, several of the male ancestors in this very limited view have more than one wife and several of the females have more than one husband. In addition, not that I am implying that any of my own ancestors had children out of wedlock (which is still entirely possible) there may be many more relationships that are not yet discovered. The existence of unknown and unrecorded biological relationships is a present undercurrent of the popular use of DNA testing to augment the basic pedigree.

If all of the marital and nonmarital relationships were actually depicted in a graphic form, I believe the pedigree might look more like this:


The standard, very iconic pedigree is based on the false assumption that the relationships shown are all biologically determined and historically correct. Any extension of the standard pedigree will involve an exponentially increasing number of additional assumptions. Even within the Family Tree itself, there is a nodding recognition of this fact as the program allows the insertion of multiple spouse (which are marked by not represented in the pedigree view) and multiple relationship types which have to be individually selected. For example, here are the choices for showing the relationship of any child to its shown parents:

Our cultural background also includes an assumption that the couple shown were "married" and the record automatically shows a field for a marriage data and place.

As genealogists in our belief in the consistency of our pedigree charts, we are essentially comfortable in our ignorance of the actual biological relationships involved even when many of those relationships have been intentionally misrepresented and passed down to us as fact. In saying this, I am merely pointing out the fact that the actual, even biological, relationships between the people on the pedigree are obscured or missing.

For example, my Great-grandfather Henry Martin Tanner, was married to two wives at the same time. Of course, only one at a time are shown on the pedigree chart, i.e. my preferred line of descent. But it is also important to note that his two wives were also cousins and shared a common ancestor. So the children of this plural marriage were cousins as well as half-siblings. Can we see that relationship on the pedigree chart? Technically, I can figure that out but when I first realized the implications this relationship years ago, it took me a while to figure out how they were related. In addition, my own parents are supposed to be cousins. I have written about this issue before. This cousin relationship is based on a disputed relationship involving an alleged "adopted" ancestor.

In confronting these types of situations, some would immediately recommend a DNA test to "settle" the relationship issues, but wouldn't a DNA test just add another level of complexity to an already partially chaotic situation? In my case, my paternal grandfather is a child in the plural marriage family and my maternal grandmother is a child in the disputed "adopted" family. But both my maternal and paternal lines descend from some of the same ancestors.

I suggest that we start expanding our concept of ancestral relationships and begin to acknowledge that our individual ancestral lines may be more complex than the standardized depictions. This type of information compels us to be more accurate in representing our relationships and providing documentation so that the more obscure relationships can be determined.