Moving Beyond Census Records: Part Nine: Finding Both the Living and the Dead 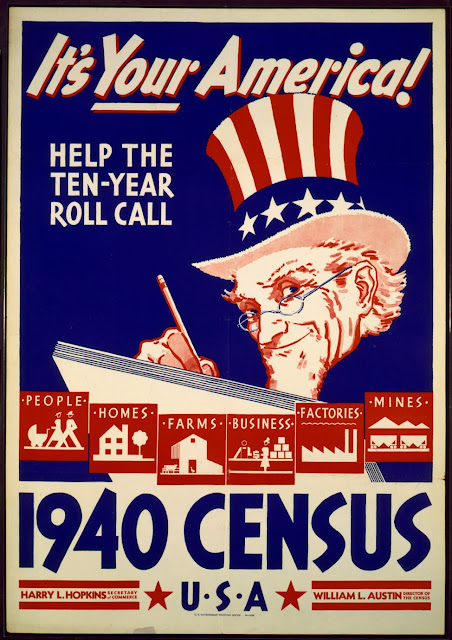 For reference, the forms and question lists for each of the remaining United States Federal Census years is as follows.

In each census year from 1920 to the present, the questions including the supplemental questions asked have become more detailed and extensive. By the 1940 Census there were 50 questions. However, some of the genealogically important questions, such as those pertaining to marriage, were asked of only a statically significant portion of the U.S. population and therefore become far less useful for genealogists. In addition, the number of readily accessible online public records has increased dramatically making the identification and location of individuals much easier since the 1930s.

For example, in the past few years, the large major online genealogy websites have included hundreds of millions of public records. Here are some of the examples of such records that have become readily available and completely searchable. It should be noted that these websites include information on people who are still living as well as those who are dead.

United States Public Records, 1970-2009
This collection is an index of names, birthdates, addresses, phone numbers, and possible relatives of people who reside in the United States between 1970 and 2009, although there are a few records outside this range. These records were generated from telephone directories, property tax assessments, credit applications, and other records available to the public.

U.S. Public Records Index 1970-2010
This collection is an index of names, addresses, phone numbers, and possible relatives of people who resided in the United States between 1970 and 2010. These records were generated from telephone directories, property tax assessments, credit applications, voter registration lists and other records available to the public.

In addition, there are hundreds of other websites, mainly commercial websites, that can assist a researcher in finding and identifying even living people in the United States. Many of these commercial websites are involved is what is commonly referred to as "skip-trace" information. That is information about people who have "disappeared" usually because of debt collection efforts by debt collection agencies. There is a major industry that has developed in the United States helping creditors, attorneys and financial institutions to locate and identify people.

Many genealogical researchers who are unfamiliar with the number and availability of public records about living people are both surprised and appalled at the detail of these records that has become immediately available for a small fee. Only the most sophisticated and diligent people can avoid being readily identifiable. The publically available information readily available to these companies includes details of people's lives that go well beyond the limited questions in the U.S. Census records.

The largest of these online commercial databases are probably LexisNexis.com and WestLaw.com. Both of these very large companies have a web of subsidiaries for locating and providing information about living individuals. These services now come under the euphemism of "risk management" services.

Although the U.S. Census records are one of the most valuable collections of records in the country, they are just the barest of beginnings for doing adequate genealogical research. It is extremely important to use additional records to supplement the initial findings in census records both to correct errors in the census records and to expand the information found and fully document the lives of our ancestors.