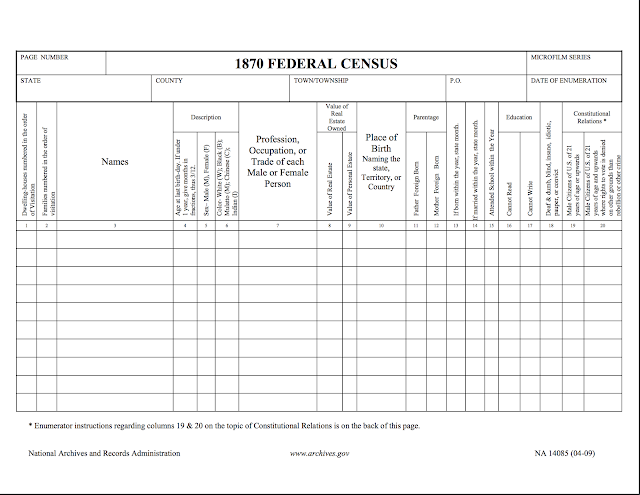 Taking the time to learn more about such "common" records as the United States Federal Census may seem superfluous, but part of understanding the information in the census records involves understanding the process of how the census information was acquired. Simply finding a census record and adding it as a "source" to your family tree is only the first step in a process of learning about the records. This can also be a pattern for learning about all types of records.

Blank United States Federal Census forms are available online from a number of different locations. Just do a Google search for the census year and form, i.e. "1870 census form" to find several types of forms. The National Archives has a page of forms, including each year of the census. See https://www.archives.gov/research/genealogy/charts-forms. The blank forms help with deciphering the headings when the digital images are not all that clear. This particular form had some specific instructions to the enumerators on the back of the sheet as noted in the asterisk comment at the bottom of the form. Here are those instructions:

The part of the enumerator’s duty which relates to column 19 is therefore easy, but it is none the less of importance. It is a matter of more delicacy to obtain the information required by column 20. Many persons never try to vote, and therefore do not know whether their right to vote is or is not abridged, It is not only those whose votes have actually been challenged, and refused at the polls for some disability or want of qualification, who must be reported in this column; but all who come within the scope of any State law denying or abridging suffrage to any class or individual on any other ground than participation in rebellion, or legal conviction of crime. Assistant marshals, therefore, will be required carefully to study the laws of their own States in these respects, and to satisfy themselves in the case of each male citizen of the United States above the age of 21 years, whether he does or does not, come within one of these classes.

As the Fifteenth Amendment to the Constitution, prohibiting the exclusion from the suffrage of any person on account of race, color, or previous condition of servitude, has become the law of the land, all state laws working such exclusion have ceased to be of virtue, If any person is, in any State, still practically denied the right to vote by reason of any such State laws not repealed, that denial is merely an act of violence, of which the courts may have cognizance, but which does not come within the view of marshals and their assistants in respect to census.

By the 1870 United States Federal Census, the process had evolved into a vast complex of enumerators and analysis. The illustration above is the cover of the instruction booklet given to the enumerators who were until 1870 appointed U.S. Marshals and Assistant Marshals in order to give them an official status and reason to obtain information. Beginning in 1880, specially trained census-takers replaced the U.S. Marshals. After 1960 questionnaires were mailed to households.

In 1870, the census questions had expanded considerably and become even more helpful to genealogical researchers. Here are the questions from the United States Census Bureau, History, see https://www.census.gov/history/www/through_the_decades/index_of_questions/1870_1.html
Just a reminder, the numbers refer the the columns in the census forms.
From the standpoint of doing further research, genealogists should focus on almost every column. As a beginning point, it is extremely important to know the exact location where an event in the ancestor's life occurred. Census records after 1850 are very useful because they give the address where the census enumerator found the individual or family. Deciphering the address may be a challenge because the enumerator may have gone up and down the street or even back and forth across the street. It is helpful to refer to a map of the enumeration district to see approximately where the enumerator might have been. A useful online help for finding an enumeration district is the Unified Census Enumeration Finder from Stephen P. Morse, PhD and Joel D. Weintraub, PhD. See http://stevemorse.org/census/unified.html

Here is an example of an Enumeration Map from the 1940 Census. More information can be obtained from the U.S. National Archives, 1940 Census Finding Aids, See https://www.archives.gov/research/census/1940/finding-aids.html#maps 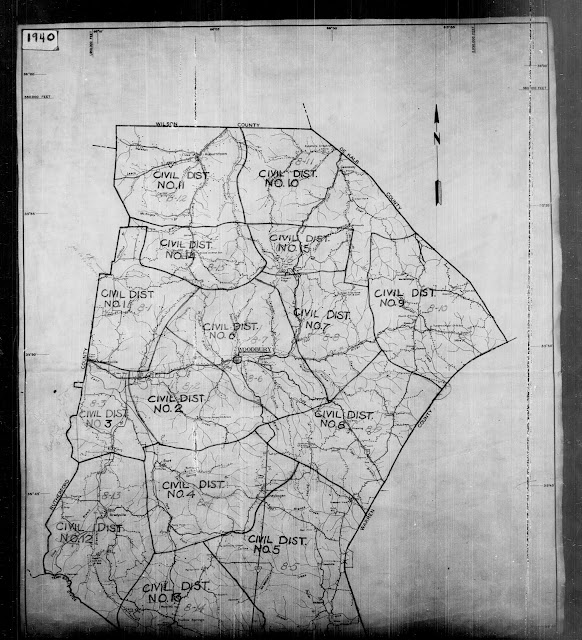 The National Archives explains the creation of Enumeration District Maps as follows:

Here are the forms used in the 1880 U.S. Federal Census. You will note that there are two pages and the second page asked for information about health, education and nativity, however the original form has all this information on one page.

The 1880 Census again expanded the number of questions asked. Here is a list of those questions.
The questions about the health of the people involved may not seem to be overly useful for genealogists, but we have to remember that many people are interested in the medical history of their family due to genetic diseases and other issues and the health history may become extremely valuable.

Just as with the previous three years, each of the answers to the questions can suggest additional record searches. For example, don't forget to search land and property records in the place where you find your family in the census.