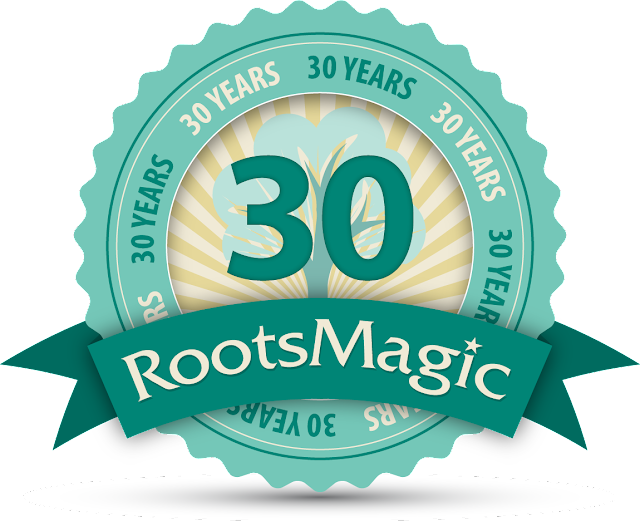 RootsMagic.com started up 30 years ago as Family Origins developed by a company named FormalSoft. Family Origins was a very popular program for about 12 years until it was discontinued in 2002 at the time of the Introduction of RootsMagic. From my knowledge of the genealogy software users, I would not be surprised if there were still some Family Origins users out there. Family Origins is still rated 5.0 on GenSoftReviews.com with the last review in 2008. Family Origins was also, at one time, owned by Genealogy.com the developer of Family Tree Maker. I should research out all these changes some day.

Back in those days, I was still a dedicated Apple user with the Macintosh version of Personal Ancestral File (PAF). But when the Mac version of PAF stopped working on the newer computers, I bought a PC and started using Windows based programs including RootsMagic. As I have mentioned many times in the past, I don't do software reviews for a number of very good reasons. Primarily, because everyone has different needs and I use a number of different programs all at the same time.

RootsMagic has continued to innovate and evolve and now has very good programs on both Windows and Apple OS X operating systems. Since I have now almost completely abandoned Windows again, I do not have any current experience with the Windows only, desktop genealogy database programs. Don't worry, I still use Windows almost every day at the Brigham Young University Family History Library where they have upgraded all the computers to Windows 10.

I really appreciate all the support and friendship that I have had over the years with the folks at RootsMagic. I have had a lot of long and interesting conversations with the developer, Bruce Buzbee over the years and very much appreciate all he and his team have done to advance genealogy. Let's hope we all last another 30 years, but for me that is not likely but may happen.

By the way, RootsMagic.com is currently one of the highest rated genealogy database programs on GenSoftReviews.com with a rating of 4.55 out of 5.0 stars.
Posted by James Tanner at 6:17 AM