Reflections on my first blog post: Check out the FamilySearch Wiki 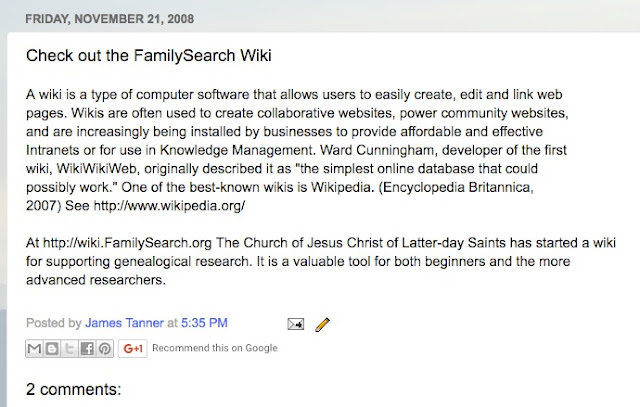 My very first Genealogy's Star blog post was posted on 21 November 2008 and as you can see in the screenshot above, it was a short, two paragraphs long. At the time that post was written the FamilySearch.org Family History Research Wiki had been online for about a year, but had only been publicly available for less than six months.

Presently the Research Wiki has over 84,000 articles and has recently undergone a substantial revision. For the last couple of years, I have been dividing my blogging topics between Genealogy's Star and my other blog, Rejoice, and be exceeding glad... The Rejoice blog is directed primarily to members of The Church of Jesus Christ of Latter-day Saints and most of my comments on FamilySearch and the FamilySearch.org website are posted on the Rejoice blog.

My own life has grown substantially more complicated since those early days of the Research Wiki. But my core activities still involve a great deal of writing and teaching. The Research Wiki is an almost perfect place to funnel down all of the information I have accumulated over the years. Although my editing efforts have decreased of late, due to the pressure of other activities including online webinars, conferences, three extensive blogs and many other activities, I still feel a huge connection to this valuable genealogical resource.

During that same time period, blogs have also evolved. Social networking has become nearly globally available. According to Statistic.com, as of the second quarter of 2016, Facebook had 1.71 billion monthly active users and there were altogether approximately 2.7 billion active social networking users. Compared to the overall reach of Facebook.com and the other social networking websites, my blogs are an insignificant dot in a huge social networking universe. I sometimes wonder what might have happened if I had chosen to write about a topic a little less obscure than genealogy?

As I always say, being famous in genealogy circles is like being the Mayor of Nutrioso, Arizona. You may have some local recognition but overall you are pretty small potatoes in the huge online world. By the way, this comment is not intended as a reflection on the real Mayor of Nutrioso, should such a person exist. But it is merely a comment on the relatively meager fame and fortune you can accumulate when you confine your online comments to genealogically relevant subjects.
Posted by James Tanner at 5:00 AM