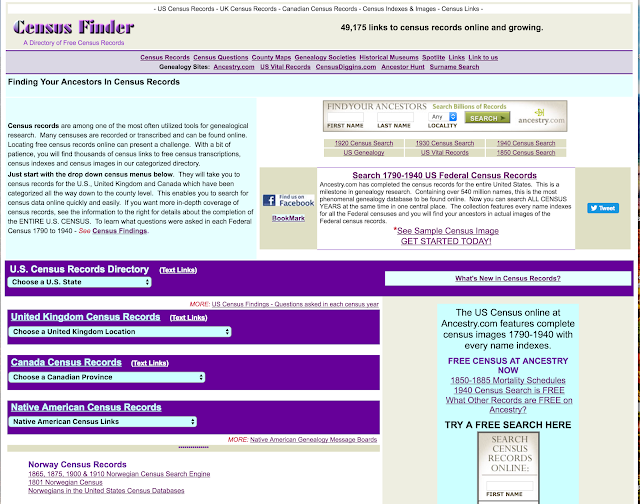 One of the more valuable websites for finding U.S. Federal Census information is CensusFinder.com, see http://www.censusfinder.com/index.htm. This website has links to most of the copies of the U.S. Census online as well as the separate schedules and even the state census records online. It also includes links to Canadian, Mexican census records and those from the United Kingdom.

Part of the 1890 U.S. Census was initially lost due to a fire and then later the remaining parts were lost because the government did not allocate funds to preserve the records and the unburned portions were destroyed. The only population schedules that survived are the following:

However, the Veterans Schedules did survive and are available online on Ancestry.com. Genealogical researchers are constantly running into unanswerable questions that could have easily been resolved if the 1890 Census had survived. The question field in the 1890 Census are as follows:

If your ancestors happen to be in one of the locations covered by the surviving records the surviving schedules can be searched online on Ancestry.com.

The 1900 United States Federal Census added some extremely valuable genealogical information concerning the number of children born to the mother of the family and the number living at the time of the census. Here is the form.

There were two questions added in the 1900 Census.
There was also a separate schedule for the American Indian population with the following questions:

I like to speculate about how hard it was for the enumerators to get responses to many of the questions asked. Researchers should be always aware that the responses were only as reliable as the person who supplied the information.