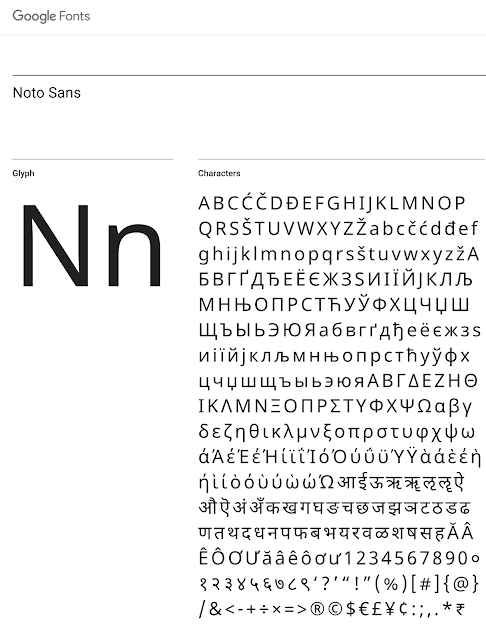 In addition to my interest in genealogy, we have been involved in a graphics design and specialty printing business for the past 30 years or so. We started out doing onsite computer support, typesetting and printing and then moved primarily into graphic design and prepress production. Because of this extensive involvement with the printing industry, we became very aware of font design. Computer fonts let us use a huge array of different fonts or letter designs.

Genealogists get involved in this aspect of computers when we begin to do research in languages other than our native language. Spanish, Danish, Swedish, Norwegian, German and many other languages have letters in their alphabets that are not in the English alphabet. All computer operating systems now provide alternate keyboard options that support a variety of characters. Now Google has designed what is very close to being a universal font that will eventually support 800 writing systems. Here is a quote from the Google Fonts, Noto Sans page explaining the reason for the universal font system.


When text is rendered by a computer, sometimes there will be characters in the text that can not be displayed, because no font that supports them is available to the computer. When this occurs, small boxes are shown to represent the characters. We call those small boxes “tofu,” and we want to remove tofu from the Web. This is how the Noto font families got their name.

Noto is a san serif font and visually similar to Helvetica or Arial. It is obviously designed to act as a generic looking font without any particularly extreme design variations. When computer programs began supporting a variety of fonts, some people began to use them in arbitrary and very unreadable ways. We have seen flyers with several different font faces on the same page for example. We have always maintained that readability and communication were the primary objectives of all of our typesetting.

Perhaps we will start to see more accurately depicted names and places in non-English languages in the future?
Posted by James Tanner at 6:06 AM