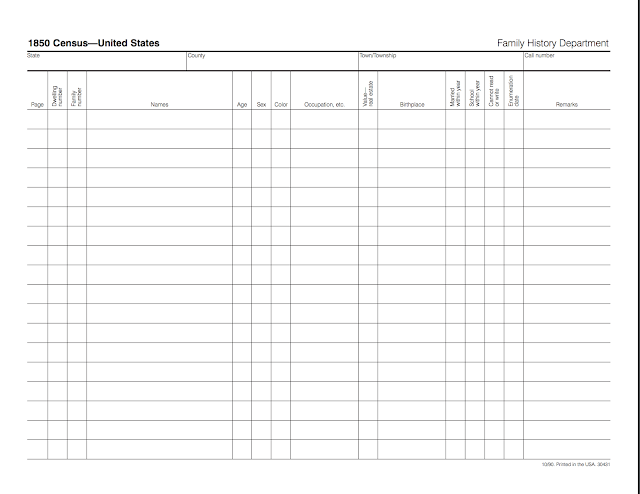 The 1850 United States Federal Census is very different from the preceding year's records. In 1850 the federal government began recording people individually instead of grouped in families. People living in the same dwelling were included together whether or not related. There were two major divisions of the schedules. Schedule No. 1 listed Free Inhabitants and Schedule No. 2 listed Slave Inhabitants. Here are the fields according to the United States Census Bureau, History website. See https://www.census.gov/history/www/through_the_decades/index_of_questions/1850_1.html

Schedule No. 2 - Slave Inhabitants
Slaves were listed by owner, not individually. Listed by column number, enumerators recorded the following information:

Genealogists with immigrant ancestors who appear in the census records often rely on the designation of the place of birth to begin research into the country of origin. In many cases the designations are misleading due to the lack of detail and mistakes made by the enumerators in understanding the responses given by the immigrants. For example, it is common in the early census records to designate the country of origin as "Germany." Unfortunately, in 1850 this reference does not apply to a specific country and can cause the unsophisticated researcher a lot of problems in beginning to do research. Sometimes, the researcher will assume that the port of departure from Europe was the place where the immigrant was born.

Age as reported in the census records is always a problem. Unless the year and month of birth are known, the age reported will depend on whether the informant's birthday came before of after the date of the enumeration. Usually, these reported ages are about one year off.

The most important information to glean from the census records is the abundance of suggested additional research opportunities. There are numerous examples of these opportunities in many of the questions and the responses. Examples include the 1850 Census questions about marriage and schooling. Both immediately suggest searching for marriage or school records in the place where the census was taken. Substantial assistance in identifying and locating these types of records can be obtained from the FamilySearch.org Family History Research Wiki. See https://familysearch.org/wiki/en/Main_Page

The main idea is to think about about additional research opportunities that accrue as a result of your ancestors' responses to the questions and not just record the census records as "another" source. It also helps to go back through the census records from time to time to discover additional hints that may have been overlooked previously.

One of the important clues that can be obtained from the census records is the relative economic standing of the people reported. The one most important questions in this regard are the value of the person's real estate and the question of whether the person could read or write and whether they spoke English. In fact, the native language indicated can also be a more accurate factor in determining the country of origin than the country listed.

Again, according to the United States Census Bureau, see https://www.census.gov/history/www/through_the_decades/index_of_questions/1860_1.html, there were multiple questionnaires used for the 1860 census, including a separate slave questionnaire (which collected the same information as in 1850 census). I have already listed the separate schedules for each of the census years.

Listed by column, the free inhabitant questionnaire collected the following information:
You can see that the questions are very similar to the previous ones asked in 1850. The additional question is the value of the person's personal estate or property other than real estate. I would guess that these valuations were usually underestimated by the respondents due to fears of increased taxation.