Many years ago, when I was just beginning some of the genealogical research efforts, I was visiting the Family History Library in Salt Lake City, Utah and seeking some help in researching one or more of my ancestors. Apparently, I was told to look at the U.S. Census Records and given a microfilm roll with the instructions to search for my ancestors on the roll. I can remember trying to search the records and finding the images almost impossible for me to read. I remember deciding that the Census was not that much help.

As the years past, of course I came to realize the value of the U.S. Federal Census as an initial place to try and locate my American ancestors. I also began to appreciate the census records in other countries, such as the Mexican, Canadian and English censuses. During those early years, before the census records were easily accessible online, I was still using microfilm copies. But I had learned that there were paper indexes to the U.S. Census records in a rather strange form called Soundex. On occasion, even after online copies of the U.S. Census began to be available, I found myself searching for my ancestors in the Soundex indexes.

The Soundex system of indexing the census records is explained by the United States Census Bureau as follows:


The Soundex is a coded surname index (using the first letter of the last name and three digits) based on the way a name sounds rather than the way it's spelled. Surnames that sound the same but are spelled differently - such as Smith and Smyth - have the same code and are filed together. This system was developed to make it easier to find a particular name even though it may have been spelled (or misspelled, as was more often the case) a variety of ways.

The decennial census Soundex system began as a project of the Franklin D. Roosevelt Administration's Works Progress Administration (WPA). Because many states did not have uniform systems for registering births, the Soundex indexes were originally prepared to assist the Census Bureau in finding records for people who needed official proof of age.

The Soundex is available on microfilm at the National Archives and its Regional Archives System, the Church of Latter-Day Saints Family History Library, and larger public libraries throughout the county. Once you locate an ancestor in the Soundex cards, you be able to make note of the enumeration district, city, county, state, and page number where your ancestor is listed. Then you can order the microfilm of the original census record, to photocopy for your family history records.

Currently, the entire U.S. Federal Census has been indexed by several of the large online websites and the Soundex system, although still available, has passed on to obscurity.

One of the more common complaints from beginning researchers is that their particular ancestor or ancestors do not appear in the census records. It is entirely possible that a family or an individual was missed in any given year of the census but it is less likely that a family or even an individual was consistently missed. The most common reasons for a failure to find an ancestor in the census is because of either name or place issues. Again, the indexing done for all of the census years has eliminated most of these problems but there are still people who cannot find their ancestors due to searching for the wrong name or place. It is also very common to find that an ancestor has been wrongly indexed primarily from an inability of the indexers to read the handwriting of the enumerators.

Putting all those difficulties aside, the real issue in moving beyond the census records is realizing that the census is telling you where to look for more records. Genealogically important records are most likely created at or near the time of an event by someone who has an interest in creating a record of the event or a duty to create a record. So, once you have located your ancestor or ancestral family in at least one U.S. Federal Census record, you can begin the process of moving on to other records.

Let me give you a simple example.

Let's suppose you find the following census record of your ancestor.

This is a 1940 U.S. Federal Census record for St. Johns, Apache, Arizona showing my Grandfather, Leroy Parkinson Tanner, and his family at the time. What additional records does this particular record suggest? That is the key question. How do we learn how to answer this particular question? That process is exactly what is involved in becoming an experienced genealogical researcher. Until we can see the possible research opportunities suggested by this type of record, we are unable to find additional, more helpful information about the family. Of course, any progress that we make in finding additional records will be limited, in some cases, by the availability of records.

Carrying this example further, what if we wanted to find a record about when Leroy Tanner died? Unfortunately, the U.S. Census is taken only every ten years and because of privacy concerns, census records are not available until 72 years after the census is taken. So the 1940 U.S. Census records were released in 2012 and the next census for 1950 will not be released until 2022 assuming the law is not changed in the meantime. So, we can't to to the next census record to see if Leroy died between 1940 and 1950.

But what is more important, we have the location where the family was living. We have Leroy's wife's name at the time and the ages of the family members. If we look closely at the ages given, we see that the oldest son is 15 years old and his "mother" is listed as being 30 years old. So either the ages are wrong or there is some other issue that needs to be investigated. Did the mother get married or have a child at age 15? Although that is possible, in this situation it is not likely. So the census record might suggest that this is the husband's second wife and that the present wife is not the mother of at least the oldest child. So let's go look for birth information on the oldest of the two children. The census record indicates that the oldest son was born in Arizona.

Looking for a particular type of record, such as a birth record in this case, involves another set of skills and experience. The place to start is to look in a reference work such as the FamilySearch.org Family History Research Wiki for information on Arizona birth records. Here is a screenshot of the page: 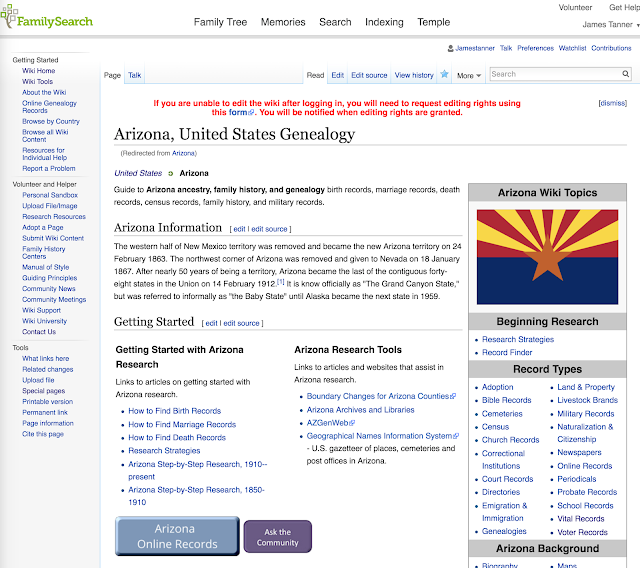 One of the topics on this page is "How to Find Birth Records." Here is a screenshot of the linked page: 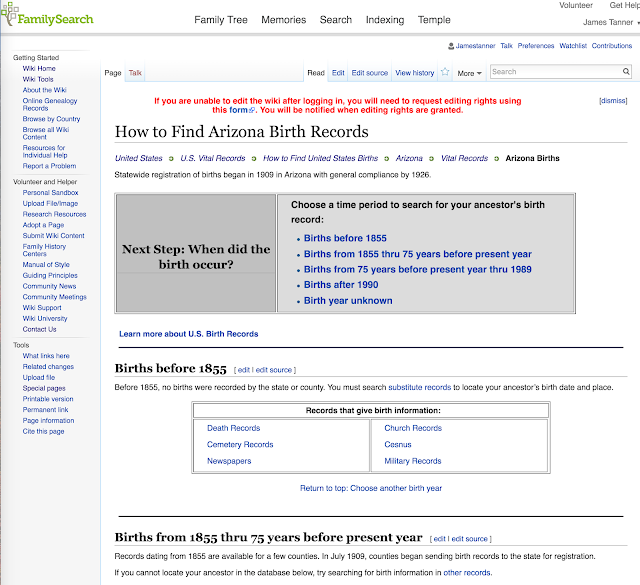 This page has a link to the Arizona Department of Health Services website on Arizona Genealogy Birth and Death Certificates. Arizona happens to be one of the only states that has such a website. 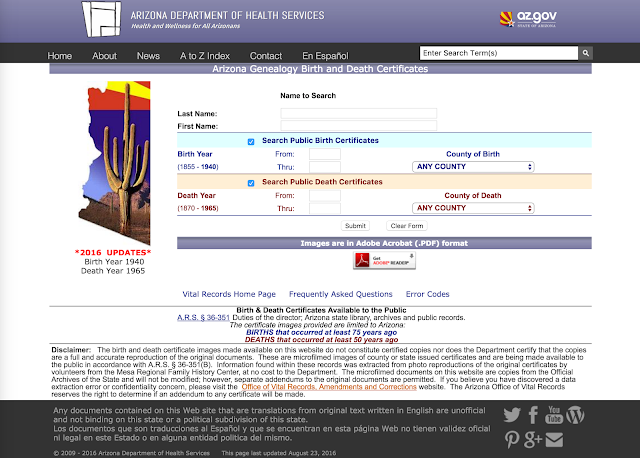 It is a simple matter of searching for the son using his name and finding a copy of his birth certificate. 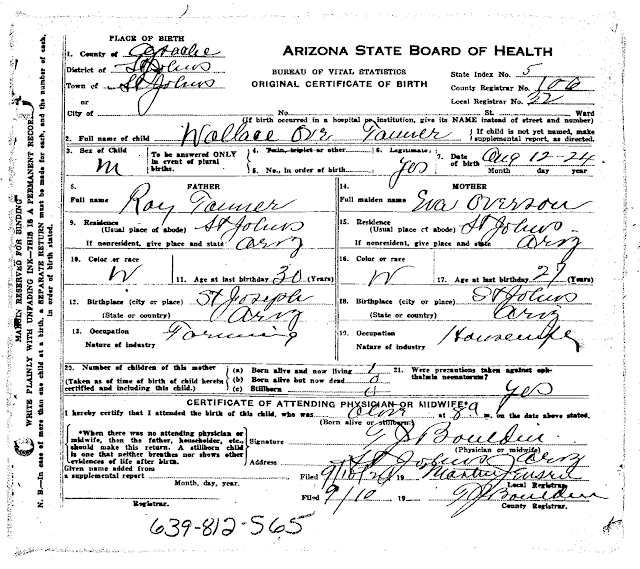 With this document, we find that indeed, the mother shown in the 1940 U.S. Federal Census is not his birth mother. We can then use this additional information to add the mother and then follow up by using the additional records found to gather even more information about the family

http://genealogysstar.blogspot.com/2016/09/moving-beyond-census-records-part-one.html
Posted by James Tanner at 7:57 AM